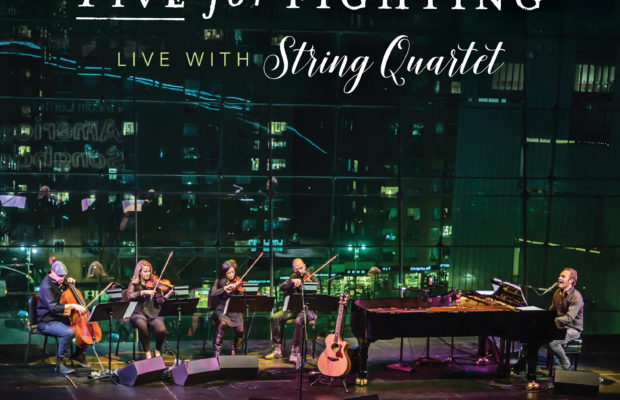 Five For Fighting will be going on tour this fall with a string quartet. Writer Steffi Wegewitz talked to John Ondrasik of Five For Fighting about his tour and what concert goers can expect. “I can honestly say, I have not been as excited about seeing a concert, as I have after talking to him. But see for yourself.”

Steffi: I have not seen many artists go on tour with a string quartet. Can you tell me a little bit about what inspired you to do this and what the audience can expect?

John: About five years ago I started doing symphony shows. I was asked to do a symphony show in Seattle and it was such a wonderful experience for me, both personally and for those Five For Fighting fans who have seen the band a few times to see a different dynamic.
It was wonderful to pull out songs from my catalog that have fantastic arrangements from world-class composers who I have worked with throughout my career. It allowed us to bring new songs into the set and also gave a new feel to the popular songs. We started doing symphony shows and we wanted to take that experience to smaller markets that maybe don”t have a symphony or we can’t bring a symphony to town. Therefore, I reduced the arrangements and started touring with this quartet, which is so exciting.
I think it’s my favorite permutation of Five For Fighting because there are these world-class, Julliard educated New York string players who are so great at what they do, but they love to come play rock and roll. For me, it’s a whole new experience. It’s much more intimate and much more musical. Fans of mine now would probably sit in a theater and have that more intimate experience, rather than a rock club. It’s been great and we keep getting asked to play more and more of these shows. People that have seen Five For Fighting before will enjoy it and those who haven’t will get a cool new experience.

Steffi: You just mentioned the quartet and the musicians you are touring with. How did you pick them?

John: I have a friend, Dave, who has played on many Five For Fighting records. When we started talking about this, I asked him to put together an A-Team and he certainly did. My violin player, Katie, was out with Adele for a couple of years. I would never claim to be at their level as a musician, so for me as just a music fan, it is inspiring to watch them play every night. Every time we do one of these tours, I pull a couple new songs out and we do new arrangement. So on every tour there is a new song or two that we do that nobody has heard before. It’s inspiring to play with them every night.

Steffi: What was the process in picking and arranging the songs for this tour? What songs were the hardest to re-arrange and which ones the easiest?

John: You have to pull out the popular songs, right? You have to play “Superman” and “100 Years” and these arrangements are actually not too complicated. You may embellish them a little bit. Then, I went back to the deeper tracks and pulled out some of my favorite arrangements, songs like “Devil In The Wishing Well”, “Nobody” and “Two Lights”. These are songs I don’t necessarily play with the band, but that have these incredible arrangement from composers like George del Barrio. Sharing those songs with the audience is so much fun.
I remember when I was making records, my favorite day of the whole record process was recording the string section. Now, I kind of get to do that every night and share these arrangements. You also get requests. You hear what folks want to hear. I have a song called “Symphony Lane”, that I wrote specifically for symphony and piano, which we now do with quartet and piano. And then there are songs that I have not played in 20-25 years, that I think are just fun to pull out for the Five For Fighting fans to hear something they have never heard before. We kind of hit on everything. We may throw a cover or two in there as well, just to have a nice little surprise for folks. We try to keep changing it up, but certainly the songs you’d expect to hear, like “Chances”, “The Riddle” and “World”, you’re definitely going to hear those songs, but also some that are deeper into my catalog.

Steffi: Do you have any favorite songs you perform live on this tour with the new arrangement?

John: “Two Lights” is always very special to me, not only because of where the song came from. It pays tribute to our military families and it also has one of these George del Barrio arrangements that just gives me chills every time I hear it. Also, “Symphony Lane” because it’s specifically for this format. The nice thing about these shows is that it leads itself to more of a storytelling experience because it is such an intimate room. It allows me to give some background on some of the songs and some of the stories of where the songs came from. I have been doing this long enough now, where I have some funny experiences to share. It’s this hybrid of a classical show together with storytelling. I also let the quartet do their thing too. Halfway through the set, I walk off stage and let them do their jam, so the audience gets to see their magic as well. There is something for everybody within this set.

Make sure to catch “Five For Fighting with String Quartet” on the upcoming 2018 tour and visit https://fiveforfighting.com/tour for more details and tickets

Check back here on Stitched Sound for photos and a review of the Kent, OH show in a few weeks.