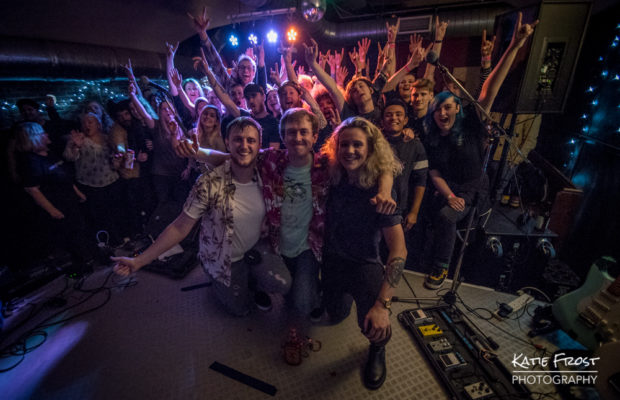 Everything Aside / Operation Guillotine / All The Rest

This was my first time attending a gig at The Tin, which is a great 120-capacity venue located in a former coal storage building in Coventry’s 18th century canal basin. First to take to the stage were pop-punk trio  All The Rest whose set was full of energy, with a particularly strong performance from their drummer Ryan who managed to break a drumstick part-way through their set! All The Rest played a great set which included a cover of “All The Small Things” by Blink 182 which went down well with the crowd. The different vocal styles of Jack (guitar) and Eddie (bass) worked really well together and their set was great fun, and the perfect start to the evening!

Next to play were Operation Guillotine, who I have seen live a couple of times before when they have supported Everything Aside in the past and are always really fun to watch. Tonight was no different as the four-piece put on a very energetic show, which included their most recent single “Burn” (released in August 2018) and their infamous cover of “Teenagers” by My Chemical Romance, which vocalist Alice dedicated to a friend they sadly lost just a few weeks ago to mental health. As with Everything Aside, tonight was also the last show with their current bassist for Operation Guillotine, and they were sure to give Chris a great send-off.

Last to hit the stage were tonight’s headliners alt-rock trio Everything Aside (who we ran an Artist Spotlight feature on back in July). Last time I saw the band was when they supported Witterquick in London in August, but tonight they were back in their hometown of Coventry playing to a room packed with fans, friends and family – some of whom had travelled from as far as Glasgow, Belgium and Germany for this very special show. The departure of bassist Nathan marks a huge turning point in the career of Everything Aside; so much so that vocalist / guitarist Kate told the crowd that this would most likely be the last time they would ever play the tracks they have released to-date under both The Prophets and Everything Aside.

They played a wonderful set featuring a great selection of their own songs as well as their much-loved covers of “Hard Times by Paramore and “St Patrick” by PVRIS. The song “Africa” by Toto has long been associated with the band, and tonight they played a full-band cover of the song for the first time, which was glorious! In celebration of Nathan, the band also played a cover of “Dean Town” by Vulfpeck, which Kate described as “basically a long bass solo” and was therefore the perfect showcase for Nathan’s bass-slapping skills.

There were tears, there were laughs…there was even a circle-pit, and the party continued long into the night (and well into Sunday morning) with the official after-party at The Ivy House nearby. Make sure you keep your eyes and ears open for what Everything Aside have in store for 2019!

Take It Or Leave It

Best I’ll Ever Have

Waiting For The End

All The Things She Said (TaTu cover)

Got Me So Bad