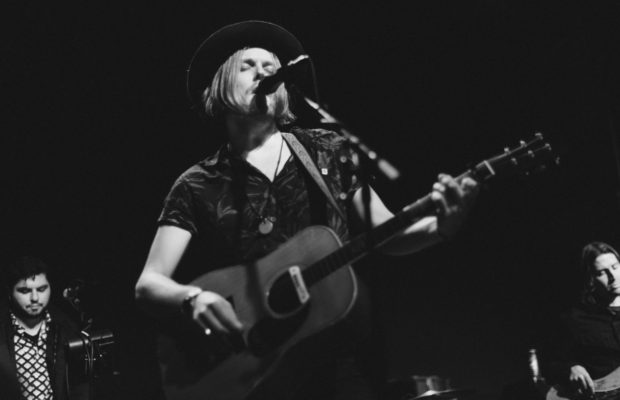 Alberta Cross is an Indie Rock band was formed in 2005 in London, England by Petter Ericson Stakee and Terry Wolfers. While Wolfers left the group in 2013, Stakee is still going strong, with multiple talented friends as his backing band. Stakee sings and plays guitar, with back up from trumpets, keyboards, bass guitar and mandolins just to name a few of the instruments that make up the music of Alberta Cross. While Alberta Cross has its roots in England, they’ve been based out of Brooklyn, New York since 2008. Stakee released a self-titled album, Albert Cross, in October of 2015.

On the 8th of June Alberta Cross are headlining a show at Rough Trade in their now hometown, Brooklyn, New York. It’s a 21+ gig, but the fans ages range from early 20s to late 40s. The crowd are chatting with their friends and enjoying drinks, but when the band begins to take the stage, the crowd comes to a hush. Stakee takes the stage last and the crowd erupts in applause. When Stakee gets in front of the microphone, he thanks the crowd for being there and starts the set. A young fan standing in front of the stage is absolutely loving it, and is rocking a bit too hard for their more mellow music.

Half way through their set they play an older song called, “The Thief and the Heartbreaker”. Stakee announces the song just by saying that they’re going to be playing an older song next, after this announcement you can feel the crowds excitement levels heighten. When they start the song, a few audience members holler out, a few others clap. Seeing a band that attracts an older crowd is always amazing as their fans are so polite and tend to love every second of the set.

Alberta Cross is a great band to see, especially for people who are missing old school rock ‘n’ roll music. Their music has a bit of an indie folk flair while still being very much like the rock ‘n’ roll us 20 something’s parents grew up on. I would definitely advise checking these guys out next time they’re on the road. In a world full of pop and electronic music, Alberta Cross are the breath of fresh air the music world really is needing.