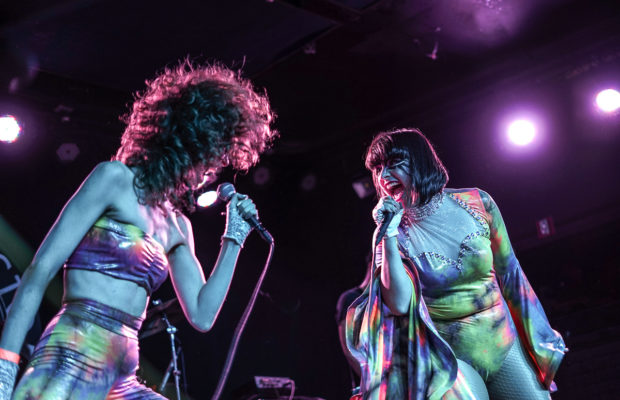 On December 6th Mother Feather played their record release show for Constellation Baby out through Metal Blade Records at the Knitting Factory in Brooklyn. Kicking off the night were the two openers Vaureen and Mutant Scum.

Mother Feather is a band that I personally hold near and dear to my heart. I have been seeing them play live since 2011 in many venues throughout NYC and have even travelled down to Philly to see them along with their stop down in Maryland for the 2016 Vans Warped Tour.

From the beginning to the end of each and every show they give it their all while decked out in amazing stage wear and glitter make-up on point. With Ann Courtney on vocals, Elizabeth Carena on keys and vocals, Chris Foley on guitar, Seth Ondracek on bass and Gunnar Olsen on drums they are a force to be reckoned with that more people need to discover and see live.Their pop-cock-rock sound is something that I admire and their songs are amazing live or being blasted while driving around with you singing along at the top of your lungs.

Everyone that I’ve been able to bring to their shows over the years instantly fall in love and get caught up in the emotions that they feel and are brought out by their songs and dance moves while on stage.

To me, everyone should be a Mother Feather fan. They are a must see.

Below are some questions that Ann Courtney from Mother Feather was able to answer.

The one that we’re performing at that night!  ( Sidetone: The Knitting Factory – Brooklyn)

What’s your favorite thing to eat on the road/while traveling?

Good coffee and anything green. I don’t take either for granted on the road!

“Shake Your Magic 8-Ball” was a song in heavy rotation back in 2011-2012+ at your live shows…what made you want to wait to have it on your second album and not on your first?

It was for purely practical reasons. We had begun recording “The Power,” “Natural Disaster,” “Shake Your Magic 8 Ball,” and “Constellation Baby” for what was planned to be our third independently released 4-song EP when Metal Blade came callin’ wanting to release a full album. “The Power” and “Natural Disaster” were the farthest along in production so those songs ended up rounding out the first album with the other eight previously-released tracks.

Favorite song off of Constellation Baby?

You must realize this is like Sophie’s Choice…but if there’s a gun to my head, “Man, I Wish You Were Here” and “I Blow a Kiss.”

Where do you want to be as a band in 5 years?

Japan, Europe, and South America, on the regular. I would like to see us getting paid more for the work we love doing and spending less time at jobs that are just about a paycheck. If the thing that feeds my soul could also pay my rent I will have leveled up and unlocked a major achievement.

If you don’t mind delving into them, what’s the story behind “Supernatural,” “I Blow a Kiss” and “Desert Island” ?

“Supernatural” is a grappling with our friend Everett DiNapoli’s suicide. He was a very intense and psychedelic person in life, and in his death he made his presence very felt

to me through dramatic natural events, never more so than when we were on tour in New Orleans, where he died. The spaceship I sing about in the song is a reference to his space portraits, a series of gorgeous, reverent paintings he made of friends and loved ones.

I didn’t know what “I Blow a Kiss” was about until after I finished it. It is one of the most subconscious songs I’ve ever written, probably one of the reasons why I love it so much. It’s about the challenge of creating something from nothing, being in a band, fighting to hear your own voice, the unknown, and letting go.

“Desert Island” was one of the most emotionally challenging songs to write for the album, and is deeply personal. I forced myself to write it under self-imposed house arrest, diving right into the center of my loneliness and cracking open my writers block with a machete. That song contains some of my favorite lyrics on the album.

What’s the message that you hope everyone gets from the album Constellation Baby?

Constellation Baby is a wish for myself, young girls and women, and everyone else. Simply: May you be free to do whatever you like. Let a girl be your guide.