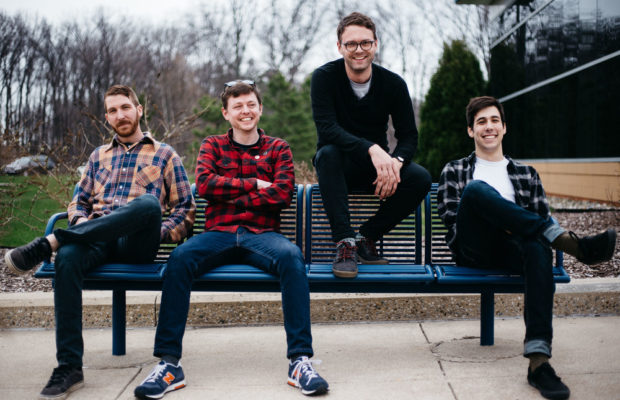 Cleveland-based band Signals Midwest are currently on the road across North America in support of their new album, At This Age. We caught up with vocalist and guitarist Max Stern and he talked all about the writing and recording process of At This Age, working with Into It. Over It.’s Evan Weiss, and about their current tour.

First things first, how did Signals Midwest get together and form and coming from Cleveland, what is the local music scene in the city like and has it influenced Signals Midwest in any way?

We started in 2008 in a dingy basement in Cleveland Heights, OH, just up the road from the colleges that Loren and I were attending at the time. At that point, the DIY punk scene in Cleveland was something we were just beginning to discover, so we started booking our own shows and also playing at a place called the Soggy Dog House, which was Matt from The Sidekicks’ house. We played with some amazing bands there: Bridge and Tunnel, Bomb the Music Industry, Delay, Lemuria, and a million others.

It’s been interesting to watch the musical community in Cleveland ebb and flow. DIY venues come and go, and as a band, we’re largely dependent on the existence of performance spaces that don’t charge huge overheads and are able to operate independently. Our guitarist Jeff has lived at and helped run Dag House for the last few years, which was a great house show space that is sadly coming to an end this November.

You guys put out At This Age earlier this month. What was the overall writing and recording process like and how long were you in the studio for? Was it recorded in Cleveland?

There were two main things that happened on this record that we’d never done before. One was a crazy amount of self-editing and a conscious desire to write more straight forward, shorter songs. We wanted every part to count and for the songs not to meander – I think our earlier material does a good bit of that, where there are certain parts that we just threw in because we’d written them and not necessarily because they served a purpose in the song. More just like “oh, I have a guitar riff, let’s put it here.” There was none of that this time – everything was examined and decisions were as purposeful as we could make them.

The other was that we had a lot of outside influence in the form of producer Evan Weiss and engineers Matt Jordan and Adam Beck. We drove to Chicago and recorded it with them at Atlas Studios, where a ton of our favorite records from bands like Alkaline Trio, the Lawrence Arms and the Menzingers have all recorded before. We spent two days in a practice space with Evan re-working a bunch of the songs and then another 10 days in the studio tracking everything. I got really sick during vocal tracking so we had to cancel the rest of the session, go on tour for a month and then I came back to Chicago in November to finish everything up.

Speaking of Evan Weiss, how did he come onboard the project and what do you think he brought to the overall process of At This Age?

I went to go see the IIOI / Kevin Devine / Laura Stevenson tour in February 2015 and we just got to talking. We’d played together before – a few acoustic shows at the Kling Thing house in Akron, OH, and also Signals had played the first-ever IIOI full-band show at Now That’s Class in Cleveland back in 2012. We just stayed up drinking beer in a living room in Akron, making prank phone calls and being idiots. It was a nice bonding moment. Anyways, we caught up at a show last year and I told him we were working on a bunch of new songs and he just said “Oh, rad, you should let me produce it!” He’d worked with our friends Annabel and You Blew It! and both of their records had turned out amazing, so we went for it. It took a while for the timing to line up since he’s such a busy dude, but I’m glad we made it work.

Evan kicked our asses. He made every part count and really stripped the fat out of each song. We were cutting choruses, trimming bridges, smoothing transitions out, really locking in on dynamics and syncing up low-end stuff like kick & bass hits. It was the most focused I’d ever been on the arrangement of each song, which wasn’t really something we’d done before – it was always just kind of a plug-in-and-play thing. In the end, we whittled nearly 40 minutes of music down to about 31. Every song is straight to the point, which was something that we needed to do. Plus, we used all his amazing gear and it sounds much, much better on record than we have any business doing.

You are touring in North America right now, promoting your new album. What have the shows been like so far and for fans that haven’t seen Signals Midwest live yet, what can fans expect from one of your shows?

The shows have been amazing so far. We book ourselves (I book everything, hah!) so every night is different. We’ve played venues, bars, community centers, DIY spaces, houses, colleges, and everywhere in between. The east coast dates in Boston, Philly and New York City were especially great, and people seem to be responding really positively to the new record. Going to Montreal and Quebec City was really special as well.

We only play for about a half an hour and really just try to cram as many songs into each set as we can. We like to get sweaty and jump around a lot. We’re a punk band – I’ll take energy over precision any day. Playing live is my favorite part about being in this band and fortunately we have our extremely talented buddy Tommy Calderon along to document everything.

You book everything for Signals Midwest? What is that like? Do you find that it might be easier if there is someone else in charge of booking or is it something you like to do and have always been in charge of?

Honestly, I like booking our tours. I like it all – the email dialogues, the spreadsheets, and the feeling you get when you finally lock down a show that you’ve been working on for weeks. I don’t know – some people like math, I like booking shows. We’re lucky enough now that it’s gotten decently easier, but I still hit snags when festival promoters ask, “Who’s representing you guys? Where should I send an offer?” – like, it’s just us over here, dude. But the relationships I’ve established from self-booking have proven to be invaluable. It felt amazing to get booked at a festival like Riot Fest! and just handle it ourselves. If it ever makes sense to take help, we’ll cross that bridge when we come to it, but I like it the way it is for now.

Earlier this summer, Signals Midwest was involved with Forever Beautiful: A Collection Of Love For Orlando, an album compilation that donated all of its proceeds to the OneOrlando Fund, the organization that donates aid the victims’ families and the survivors of the Pulse Nightclub shooting. What made you decide to get involved with the compilation and why did you choose “Milkcrate” to be the song included on the compilation?

Our friend Sean books amazing shows in Orlando and lives just a few blocks from Pulse. It was amazing to see the reaction and how many people wanted to get involved. I chose “Milkcrate” because it’s a song about loving your hometown and contributing to it, and it’s flown under the radar as one of my favorites for years.