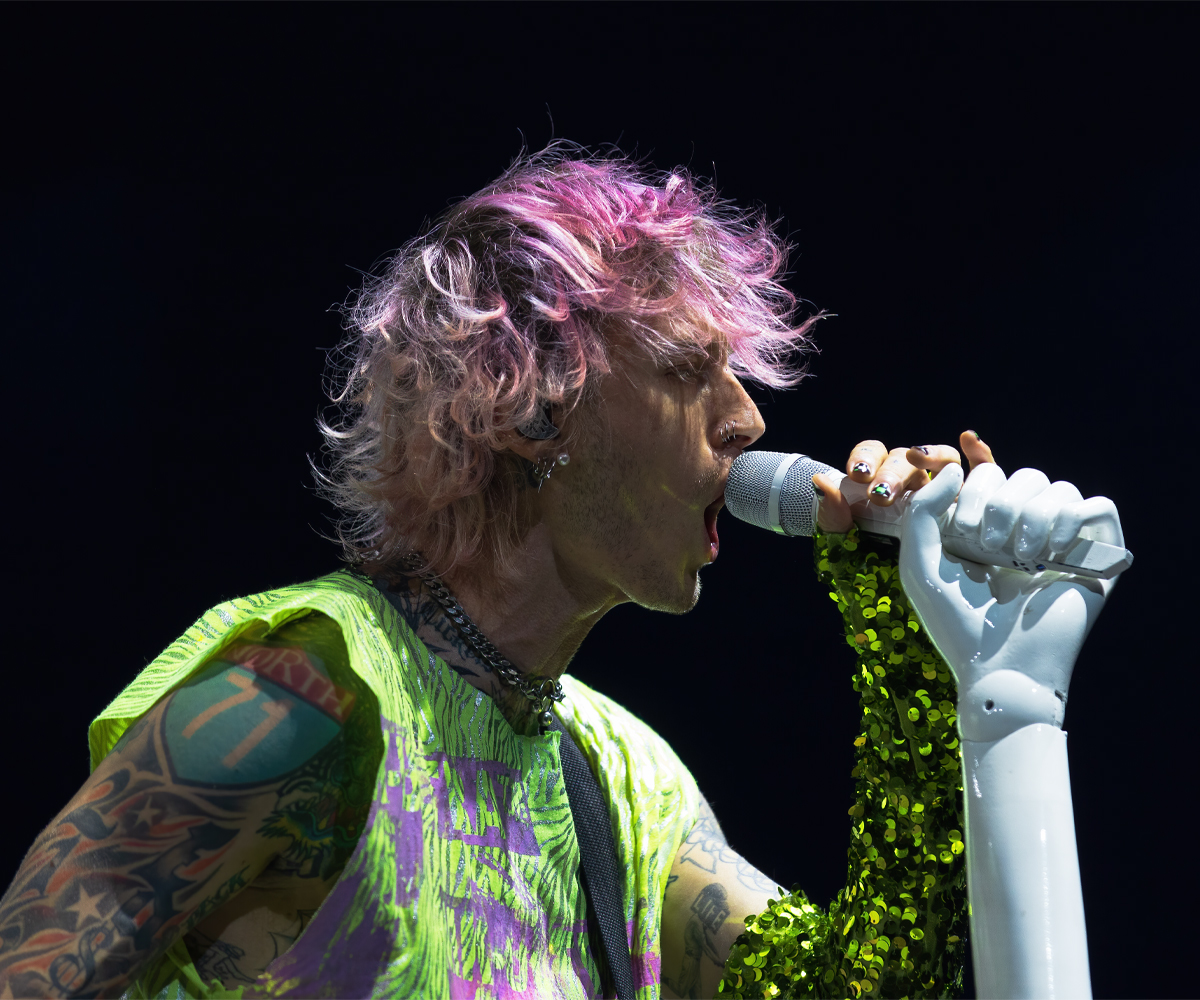 Photos and Words by Dan Rose

This was my third time seeing MGK live in the UK. Prior to this, I had seen him at both of his shows in Bristol but this was my first time seeing him at an Arena. I travelled to Birmingham and what a show it turned out to be!

Machine Gun Kelly, real name being ‘Colson Baker’ is a genre-bending American artist from Cleveland, Ohio. He has collaborated with the likes of Lil Wayne, Halsey, Yungblud, Little Mix, Trippie Redd, The Kid Laroi and Travis Barker. I’ve been a fan for a long time now and attended a show on his 27 World Tour (2017) and the Hotel Diablo World Tour (2019). It has been a pleasure to see his progress from performing at 1,600/1,800 capacity venues in Bristol (UK) to now packing out a venue with nearly 17,000 capacity. This just goes to show that an artist doesn’t have to be defined by one music genre in order to be successful. Personally, I must say I actually prefer the route MGK is taking with his alternative rock albums. ‘Tickets to My Downfall’ has been on repeat for me since it originally came out!

Before MGK took to the stage, his fans were treated to two incredible support acts: 44Phantom and Iann Dior. I can’t really comment on their performances apart from the first 3 songs of both of their sets, due to me being escorted out of the main arena in between each act by the arena staff. It was a shame not to be able to listen to the whole set, as I have been listening to Iann Dior for a while since first hearing him on 24kGoldn’s huge record ‘Mood’, which he did perform during his set in Birmingham.

The lighting went dark just before Colson took to the stage and the Arena erupted with excitement as the fans waited in anticipation for their first glimpse of him. Amongst the darkness of the stage, I caught glimpses of Rook (drummer) and Baze (Bass) who have always remained with MGK when he performs live anywhere in the world. However, now the live band has a new addition and what a fantastic addition I might add. Sophie Lloyd who is a Rock/Metal Guitarist and Social Media Content Creator from London has been recruited by MGK to join him as one of his guitarists on his Mainstream Sellout tour. I first came across Sophie when I was scrolling on my for you page on TikTok. It’s inspiring to see how much of an impact social media can have on providing people like Sophie with opportunities like this. It was a pleasure to see her shred the strings in real life – what a talent she is. I was in awe of how electrifying her playing is!

MGK walked on stage with a gold sequin sleeve on his left arm and during the show, he told the fans that Ariel (The Little Mermaid) gave it to him and then humorously went on to say how bad of a joke it was! With an extravagant entrance, he started to climb a rope ladder attached to a pink helicopter to kick off the show and perform in mid-air above the stage. Throughout the concert, this pink helicopter played an important role, among a few other things, in immersing the fans in a creative storyline in between the live song performances. At one point in the show, pink confetti strings were fired out of cannons attached to the helicopter and slowly covered the crowd. To me, this almost resembled when an apache helicopter shoots flares from it.

The stage production, visuals and graphics were probably the greatest I’ve ever seen at any show in my life. It was clear to see that an enormous amount of time, effort and money had been put into this tour. The pyrotechnics were next level and I really wish I was able to carry on photographing and capture just how insanely spectacular it was from the crowd after photographing the first three songs in the pit area. The stage floor remained a black/white checkered pattern throughout, but the backdrop constantly changed as the show progressed. There were stairs so MGK and the band could perform on higher platforms, which provided the crowd with better glimpses of them. Spread around the stage on different steps of the stairs were television screens which regularly displayed different visuals. Halfway through the show, a mysterious figure appeared from the back left-hand side of the stage and Machine Gun Kelly often interacted and spoke with it. It had a body that resembled that of a human but possessed a head which appeared to be an enormous computer/TV screen. This figure became known to the crowd as ‘The Internet’. In my eyes, MGK was essentially referring to how people on the Internet try to put you down and keep you restricted in a box. If he listened to the opinions of people on the internet, MGK would never have ventured out and explored other avenues in his musical career, and probably would have never transformed from creating hip-hop/rap music to making fantastic alternative rock albums. The fans were asked to chant ‘F*ck The Internet’ alongside Machine Gun Kelly to the on-stage presence in regards to this message. Something which changes throughout every one of MGK’s tours is the visual appearance of the microphone stand, and this is something I have always noticed immediately. Looking back on videos I previously recorded when I attended the Hotel Diablo tour in 2019, the mic was designed like a cobra snake. This time on the Mainstream Sellout tour, however, the mic stand was two hands, with one higher to hold the actual mic and the other to hold a metal ashtray for MGK’s cigarettes that he smoked throughout the evening whilst performing. Absolute rockstar sh*t!

I was extremely excited that songs from the album ‘Tickets to my Downfall’ were performed at this show because, as I said previously in the review, this album has been on repeat since its release in 2020 during the Coronavirus pandemic. In all honesty, it is one of my favourite albums of all time because it’s one of those rare albums that I can listen to and not skip any song at all! During his setlist, MGK also performed songs from the Hotel Diablo project.

This was my most memorable time seeing Machine Gun Kelly live to date, as it was on my bucket list to get the opportunity to photograph him perform one day and I’m so grateful I was given the opportunity to accomplish this. I can’t wait to see what the future brings for Colson, and I hope he remains along the Alternative Rock route now but I will remain a fan no matter which direction he decides to take with his career.