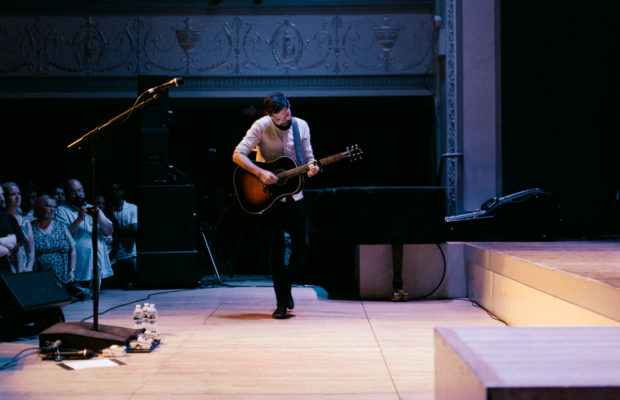 When I arrive at the Roulette in Brooklyn, the venue is packed, but all of the fans are sitting on the floor waiting for Passenger, AKA Mike Rosenberg, to take the stage. When the lights dim, Rosenberg takes the stage on his own with an acoustic guitar. His on stage banter is spot on, make the crowd laugh and it honestly feels as though he’s addressing everyone individually, rather than just out into a room of people.  He starts the set with ‘The Long Road’, and nobody in the crowd is singing along. It’s an off-putting vibe to be standing in a room watching somebody perform and being able to hear a pin drop. The juxtaposition of the crowd’s engagement with Rosenberg’s onstage banter and lack of engagement while he’s singing is unlike anything I have ever heard before. It takes six songs into the set for the crowd to get involved in the music, and that is only because Rosenberg invites them to sing along to his song ‘I Hate’ which is a song that just lists a lot of things he hates about the world. It’s a tongue-in-cheek song taking the piss out of the world, and it’s a pretty great tune, and it’s also a nice change of pace hearing the crowd finally getting into the set. Seeing Passenger perform is absolutely incredible, his voice live in even better than it sounds on records, which doesn’t happen that often. Other than the fact that the fan-band dynamic was out of my comfort zone, it was truly magical hearing Rosenberg perform live.