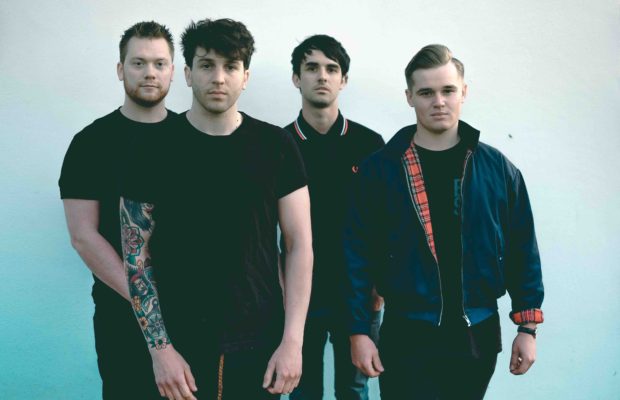 Hailing from the UK, dirty pop rock band Faux may have only been together since 2014, but they are making waves with their music and their latest single “Hot Headed.” Currently in the studio working on new tunes and gearing up for their UK tour with Counterfeit next month, Faux vocalist Lee chatted with us about the band’s history, their new music, and what is in store for them this year.

Your new single “Hot Headed” was just released. What made you guys release this track first?

“Hot Headed” really is a stepping stone between a sound we had and one that we want to lean towards. I can’t say much more than that without giving some stuff away, that I would like people to discover a little more organically, but we had a lot of faith in it as a song and really enjoy playing it.

The lyrics of the song as you put it “explores the struggles of big personalities in small tight friendship groups.” Did the inspiration come from being the big personality in the group or witnessing it?

I did originally try and convince myself that the song was not about me, but the more I listen to it, maybe it is? I originally wrote it about someone else, but I think it applies to a lot of people’s relationships with their friends.

Friendships seem like a rarely explored topic in rock music compared to romantic relationships, do you find it important to tackle other topics outside of the typical love song?

I mean, romance is a pretty great subject and one that will probably continue to be written about indefinitely, but I like to write songs about thing’s in my life that are not quite so obvious, but make the lyrical content seem as though it’s about a girl / guy that you’re in to. This way I get to write songs about teaching my dog to come back to me when I let him off the lead and our listeners get to feel “all the feels.”

Where do you draw the most inspiration from?

Mostly our friends and family. We also look up to our friends making music to name a few Bad Sign, Press To Meco, Signals, Chapter & Verse and Creeper, they all work so hard and write music we love to listen to and constantly raise the bar in terms of where we should be aiming.

Listening to the Inhale EP and “Hot Headed” your sound is very unique, what do you think sets you apart from other bands in your genre?

I think we have the ability to take something really simple and make it sound interesting and fresh. We’re not exactly reinventing the wheel, but we like to think we can make it a little more interesting.

You guys are a month away from going on tour with Counterfeit, how are you preparing?

We’re currently recording lots of new music so at the moment, we’re not thinking too much about that other than getting all of the new songs really locked in and sounding as tight as possible. We can start to worry about all of the important things at the last minute and panic / have a mental breakdown… Yeah that sounds like us, we’ll do that.

A stop on this tour is going to be Teddy Rocks Festival, do you guys enjoy playing Festivals?

Playing festivals is an incredible experience! Due to still being early days for us, all of the festival slots we have had have been in the day time which is a little daunting at first as you can actually see people’s faces! Which sounds weird because when you play in a normal gig environment, you do presume everyone has a face, but you can’t see the disappointment as much… (I joke I clearly mean elation).

How does a festival set differ from a typical show set?

We are usually a lot more full as we can’t help but hit up all of the local food stalls, how will we ever know which one is the best if we don’t try them all? Other than that, I would say that depending on how much time we have been given, we try and play the songs which we feel are the punchiest at the start rather than leaving them till the end. Festivals tend to be populated from the start until the end of your set a little more consistently where as in venues, people seem to be heading in from the bar for the first song or so.

If there is one thing you want people to take away from listening to your music, what would it be?

Just simply that they really enjoyed listening to it. We write songs that we feel are fun to play and sing along to in the practice room, so if that translates into other people’s opinion of us then that would be swell!

Have lots of fun hanging out together; we really value our time together even if it’s when we’re all tired at 11pm on a Tuesday evening after working all day. It’s always still a great vibe between the four of us. Oh and to get riggity riggity wrecked son!

Faux will be hitting the road with Counterfeit in the UK this spring, check out the list of dates here.