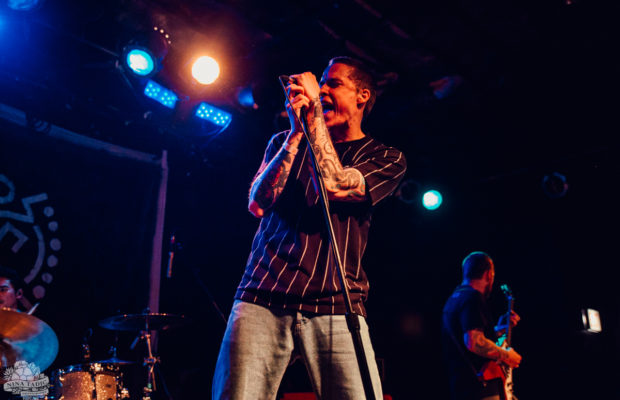 The Story So Far is a band that has always put on a fantastic show, and continues to do so. Last week in Chicago, the band put on two nights back-to-back at Bottom Lounge with support from Drug Church and Turnstile. Both nights sold out, and with good reason.

Every band on the lineup was full of energy and knew how to keep the crowd moving. Drug Church, all the way from Albany, New York, may not have been playing a hometown show, but they still put on a performance like they were. Usually, when an opener’s set is fairly early, the crowd isn’t necessarily very large or very familiar with them, but this was not true for Drug Church. They definitely have a following in Chicago, because the room was already halfway full for their set, and the crowd was yelling lyrics right back at their vocalist the entire time. They received a warm welcome, and did a great job kicking off the night on Thursday.

Following their set was Maryland punk hardcore outfit Turnstile, who are very well known for their fast-paced energetic performances. Immediately, not even half a song in, every band member was jumping around, running across the stage, and just letting out all their energy in the most vibrant way. They performed a good amount of songs off their full length album, Nonstop Feeling, and pushed the crowd to let loose. There were crowd-surfers, countless circle pits, and more, their entire set. Vocalist Brendan Yates also climbed onto the barricade multiple times, getting in the crowd’s faces and passing around the mic. Needless to say, the chemistry between the band and their audience was magnetic.

The Story So Far wrapped up the night with a very laid-back set, but still enough energy to keep the crowd wired. They played a solid variety of their older hits and more recent releases, and in that got a phenomenal reaction from the crowd. Crowd-surfers were coming up in waves, and every single person in the crowd at some point or another was finger-pointing to every word and jumping around. There is a certain level of catharsis that comes with being in the crowd for a pop punk set, because the feeling in the room is more energetic and upbeat than almost anything imaginable, and that was definitely shown with The Story So Far’s set.