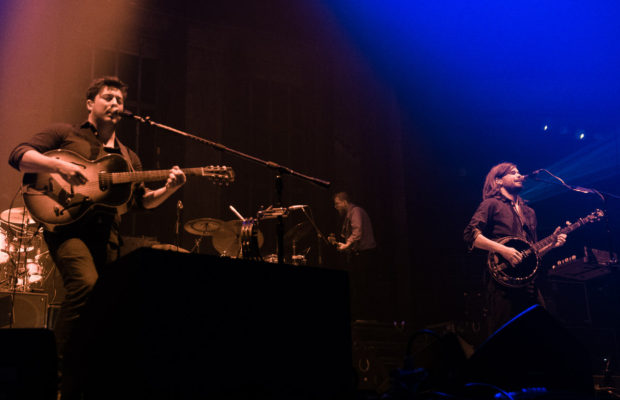 Mumford and Sons made a stop in Louisville, Ky recently on their current US tour to a sold out crowd.  I was told that the show sold out within an hour of being on sale, which is easy to believe.  They pour their hearts out on stage, giving their fans a passionate and energetic performance every time they perform. The guys frequently switched instruments throughout the set, with Marcus switching from an acoustic guitar to an electric guitar to the drums, Winston switching from a banjo to an electric guitar and Ted switching from an upright bass to a regular bass.  They played many of their fans’ favorites, such as Awake My Soul, Little Lion Man, I Will Wait and The Cave, as well as a couple of new songs.  They had incredible lighting, and even had some pyrotechnics for a couple of songs!  Towards the end of the set Marcus, with his microphone in hand, made a lap around part of the upper arena, then ran down the stairs and into the crowd on the floor, to the delight of those fans.  It is apparent that these guys love their fans and their fans adore them.  Everyone was in high spirits, with the audiences’ cell phones in the air for most of the night, capturing their favorite moments.  Ending their set with a three song encore, they gave their fans an energetic finale to a wonderful evening!