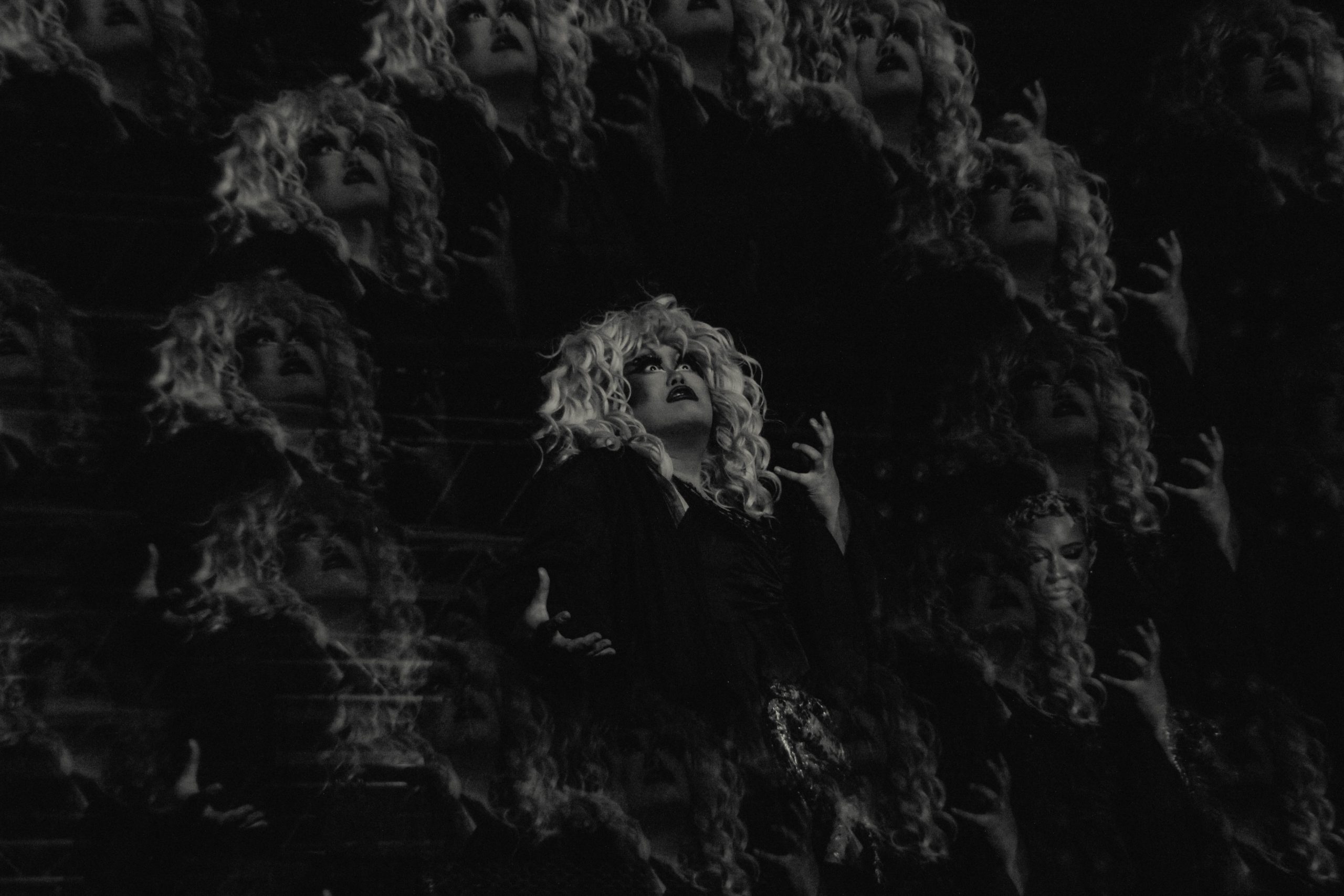 For many live event photographers around the globe, 2020 has been quite the drought of opportunities. So, when I caught wind that Voss Events would be hosting another Drive N Drag tour, but this time spooked for the gods, I was stoked. The tour featured some of the hottest stars from the Emmy Award winning series, RuPaul’s Drag Race. The Voss Events’ Drive N Drag Halloween drag show tour swept across some of our nation’s largest cities this fall, including Philadelphia, San Francisco, Boston and a Halloween weekend conclusion here in New York.

After battling some of the cities worst traffic since pre-COVID times, I made it out to the Westfield Sunrise Mall parking lot in Massapequa, Long Island. I’d be completely lying to you if I told you I had any idea where I was, but I didn’t give a damn! As a veteran Warped Tour attendee, I was no stranger to concerts in mall parking lots — and to be fair, some of the best performances can come out of them! We rolled up to the entrance an hour and a half before doors opened and, to my surprise, we were not the only ones waiting. It was a brisk Mischief Night (oops, my Philadelphian is showing), and there were no TP’d houses or egged cars in sight, just the mashup of every single song on RuPaul’s discography blasting from every car.

Doors opened and we pulled into our luscious VIP spot, perfectly social distanced from the stage (literally 6 feet) and front and center. The party had already started and there was no time to waste. We parked the car, cracked open some cold ones — spiked seltzer, hunnies, don’t get it twisted — and huddled around the warm engine of our car to watch Lady Bunny as she worked the crowd with her pre-show DJ set. After a half hour of ushering cars into their respective parking lots and Lady Bunny strutting her stuff down the runway, the show was set to begin.

Drive N’ Drag: Halloween Edition was not just a drag show for the ages, it was also an extremely spooky seance hosted by Asia O’Hara. Asia really kicked the show off on a strong start with a great attitude, lots of humor and a wonderful performance to set the tone for the evening.

Yvie Oddly performed next with a jaw dropping costume transition mid performance. Seamlessly incorporated into her routine, Oddly began crawling towards the crowd on the catwalk, as shreds of fabric were ripped from her dress, revealing a horrifyingly stunning alien-like bodysuit underneath. Known for being the “creepy” queen of the shows lineup, Oddly hit the ball out of the park with her performance that evening.

Now, I have never been one for clowns. Ever since a young age, I have found them to be absolutely terrifying, avoiding them at all costs and Kameron Michaels performance really solidified those feelings — but in the best of ways. With her extremely emotive performance and clear passion for her drag, Kameron Michaels completely blew the crowd away with her spooktacular creepy clown look and performance.

Kim Chi, a favorite queen from Season 8, took the stage in a Grease style opening routine. After getting dumped by her boyfriend, Kim Chi revealed her gorey costume from beneath the witchy gown she was wearing. Bloody intenstines spilled out of her dress and dragged along the floor as she lip synced the breakup pain away.

A personal favorite queen of mine, winner of Season 7, Violet Chachki took the stage next. Known for her burlesque and arial influences incorporated into her performance, I was truly bursting at the seams with anticipation for what this next performance would entail. Donning a traditional witch outfit, complete with the pointy hat and her signature waist cinch, Violet Chachki graced the stage. Blown away completely by her utter beauty, nobody noticed the transition into her arial moment and suddenly Violet was flying through the sky on a broom.

Then, to conclude her performance and as if the crowd could handle any more surprises, Violet walked to the edge of the catwalk and looked out into the crowd of hundreds of cars. Suddenly, we were playing with fire. Backed by a somber version of “Come Little Children” from the hit Halloween movie, Hocus Pocus, Violet twirled her flame rings around her body, before disappearing into the darkness behind the stage.

A swath of dancers surrounded a cage, covered with a black cloth, that was rolled onto center stage. The black cloth was snatched off the cage, faster than any wig could have ever been snatched, and the crowd went wild. It was clear that there was a crowd favorite and Vanessa Vanjie was it. The hoots and hollers remained throughout the entire duration of Vanjie’s performance and she clearly did not come to play. The passion flowed through Vanjie during her performance and I could tell that everyone, queen included, was having the time of their lives!

Closing out the night was Season 10 winner, Aquaria. The Lady Gaga influence was potent in Aquaria’s performance through both her Gaga soundtracked performance but also in her Gaga inspired clothing and routine (Lady Gaga, 2009 VMA’s, “Paparazzi”… anyone?) Aquaria’s performance was the performance to close out the evening with. It featured music that everyone knew and was able to sing and dance along to, and it was so high energy that it had people cheering from the rooftops — of their cars — but, I digress.

Overall, this seasons Drive N Drag: Halloween edition was a much needed restoration to the lack of live music and performances that we have seen this year. The Voss Events Drive N Drag nationwide tours just continue to prove that drag queens are on the cutting edge of innovation and are the supremes at working with what they have got. A mall parking lot, in freezing cold temperatures, in the middle of a global pandemic? We got you, the show must go on! Drive N Drag: Halloween Edition, allowed for a much needed break from the stress that has been 2020 and it allowed for a wonderful, and surprisingly intimate, experience with some of the top names in drag right now — certainly a lot of queens that I never expected to have the honor of seeing live!