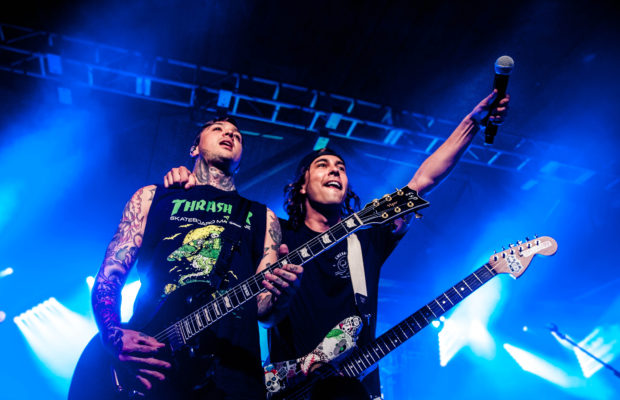 Pierce The Veil, Neck Deep and I Prevail

The highly buzzed about Made To Destroy Tour made its way to Seattle, Washington this past Tuesday, I Prevail, Neck Deep and Pierce The Veil playing to a diverse crowd of eager fans who have been waiting quite some time to see each band on the tour’s lineup.

Opening up every night of the tour is I Prevail, a hard rock band from Detroit, Michigan. Playing a mix of old tracks and songs that will be on their forthcoming album, Lifelines, out October 21st, vocalists Brian Burkheiser and Eric Vanlerberghe kept the energy high throughout their set, Vanlerberghe spending nearly as much time in the crowd as he did on the stage. Fans attending the show showed the highest energy during the band’s cover of Taylor Swift’s famous “Blank Space”, I Prevail really setting the stage for the rest of the bands that night.

Coming all the way from Wales, Neck Deep are returning to tour life after taking the summer off to write music for their upcoming album. Opening with “Gold Steps”, undoubtedly one of the most popular tracks from their latest album, Life’s Not Out To Get You, the crowd’s energy from start to end showed just how much the fans have missed Neck Deep since their time off this summer began.

Although there were a few technical difficulties at the start of the set and vocalist Ben Barlow was dealing with a recent foot injury, Neck Deep still gave it their all during their performance, proving why they were voted Best Live Band at this year’s Alternative Press Music Awards.

While Neck Deep played fan favorites including “A Part Of Me” and their recently reworked track “December”, the band also threw in “I Hope This Comes Back To Haunt You”, a song off of Life’s Not Out To Get You that hasn’t been included in any of the band’s recent set lists.

Closing their performance with “Can’t Kick Up The Roots”, a high energy track about making the most of the place you come from, fans were left wanting more as the band left the stage, causing many to already anticipate when Neck Deep will be coming back to the Pacific Northwest.

Every time Pierce The Veil swing through Seattle, they always seem to outdo themselves in some way. For this particular tour, their stage set up takes the live concert experience to a whole new level.

As the curtain fell at the start of their set, each member of the band emerged from the spaceship stage set up in full on astronaut-like jumpsuits. Taking their positions and kicking into “Dive In”, the opening track of their latest album, Misadventures, fog shot up at the front of the stage as confetti blew out into the crowd, giving Pierce The Veil an entrance that fans will remember for times to come.

Finding a perfect balance between tracks off of Misadventures and past releases like Collide With The Sky and Selfish Machines, Pierce The Veil’s setlist left every fan satisfied. For many of them, the acoustic performance of “Kissing In Cars” is a moment they won’t forget.

Opening up the performance by talking about the meaning behind the song, vocalist Vic Fuentes shared that the song was written for two of his closest friends that were getting married and turned to him to write a song for them. Giving Fuentes a personal diary of notes they had written to each other, he took the couple’s personal memories and wrote “Kissing In Cars”, a track he only ever meant for the couple to hear.

Reminding fans that Pierce The Veil recorded their first album in Shoreline, Washington, just north of Seattle, Vic Fuentes took a moment that night to talk about the band’s intimate ties with Seattle.

After struggling to finish writing for Misadventures, Vic found himself flying up to Seattle for inspiration, eventually writing the final songs for the album during his stay. Crediting the people and “vibes” in Seattle for the inspiration he needed to write, it is clear that Seattle is a place in the world Pierce The Veil hold close to their hearts.

Closing out the night with “Circles”, a fan favorite from Misadventures and one of Pierce The Veil’s most famous tracks to date, “King For A Day”, the band’s fourteen song set and the crowd’s undying love and consistent energy for the band from San Diego made for an unforgettable night.

Over the years, Pierce The Veil’s managed to never lose their live stage presence. Creating one of the most electrifying and energy filled performances this music scene has ever seen, you don’t want to miss out on The Made To Destroy Tour so be sure to get your tickets for the remaining dates while they are still available!