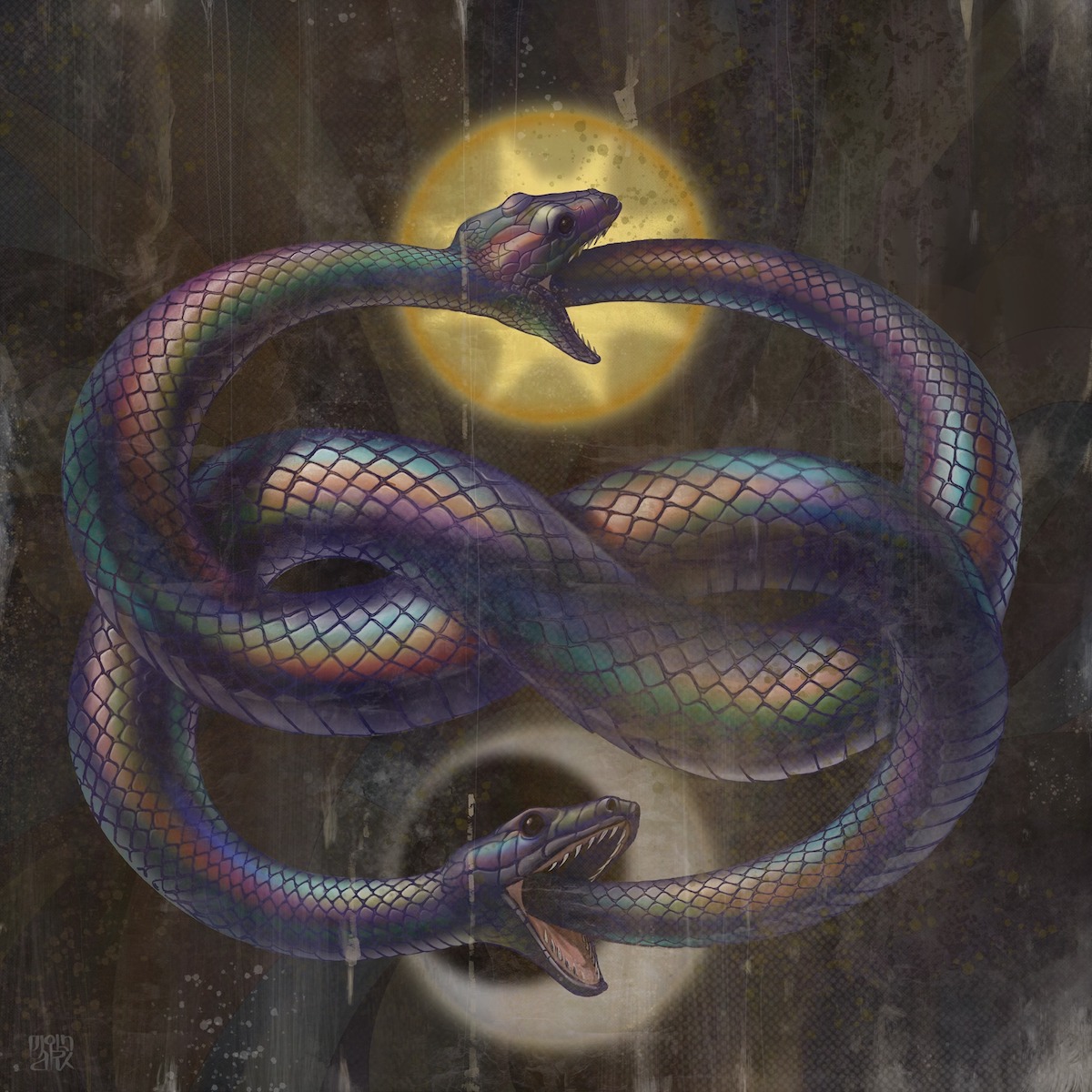 Los Angeles based duo Bósa (Stephan Jacobs and SuneV) recently joined forces with longstanding friends, legendary Bay Area world fusion trio Beats Antique for the tribal inspired “Ouroboros.” The track first originally began in a session between Stephan and Sidecar Tommy during his trip to the Bay Area in 2019. After several months, the groups decided to make the track into a Bósa and Beats Antique collaboration. David Satori adds his dexterous banjo, and Sunev brings in his celestial vocals with each of the musicians integrating their unique musical talents. Bósa and Beats Antique merge hypnotic beats with organic instrumentation, while Sidecar Tommy smashes out syncopated rhythms, and Stephan churns out an inspiring palate of galactic synth sounds. The result is an intricately woven and complex tapestry of sonic euphoria.

The song carries a powerful alchemy along with it. “Ouroboros” unites the spiritual and physical worlds to produce a creative, one of a kind sound that highlights the best musical aspects of both groups and each of its respective musicians. Derived from a mythical story, “Ouroboros” is allegedly composed of stardust, claiming the unique ability to cast spells. Once this happens, a period of rapid transformation can occur. The ancient symbol depicts a dragon or serpent eating its own tail and symbolizes the cycles of life, death, and rebirth, also known as the eternal cycles of renewal. “Ouroboros” is out now on Beats Antique’s own emblem Beats Antique Records.

“‘Ouroboros’ is our call from the past as we reach into the future at a time of processing many layers of our physical and spiritual realms. Herein the spirit can take time to reflect as it prepares for a celestial reboot.” -Bósa

Bósa powerfully merges primal and refined sounds, masterfully blending methodically composed electronica with world-inspired live drums. Utilizing globally sourced field recordings from their travels as independent musicians, Bósa delivers a sound that pushes the boundaries of traditional house music. The Bósa vibe is an unparalleled one of evocative contrast, the marriage of low driving frequencies and euphoric soundscapes, seamlessly woven together with rich ancestral percussion. The dynamic duo consists of veteran DJ/producer Stephan Jacobs and Sunev Lovechild. Stephan Jacobs is an immensely prolific music producer with his own unique style who has shared the stage with major artists such as Pretty Lights at some of the world’s most renowned festivals such as Coachella, SnowGlobe, Lightning in a Bottle, and Austin City Limits. Sunev Lovechild is an extraordinarily talented musician who adds his unique flavor as a percussionist, vocalist, and globally recognized instrumentalist.

Their collaboration began years earlier as their destinies intertwined in the city of Los Angeles. The two friends found themselves performing together at festivals, nightclubs, and conscious gatherings. What began as an impromptu set with Stephan DJing and Sunev performing alongside him on live percussion soon gave way to requests for the duo to play together; thus the Bósa project was officially born. Their overall ascending style of music is one that incorporates flavors of a transglobal reservoir, made from the raw star materials of space, sculpted and transformed into songs of elation. As this new entity emerges from the creative universal mélange, the intention of its trajectory is to go forth with an inclusive state of family. Bósa invites all those that seek an audible journey to a mystical realm, using music as a means for healing the spirit and celebrating through dance.  You can connect with Bòsa via: WEBSITE | SPOTIFY | SOUNDCLOUD | INSTAGRAM | FACEBOOK

Beats Antique is an American crossover band that experiments with world fusion and electronic music. Formed in 2007, they have built a reputation for their eclectic mix of genres as well as their enchanting live shows. You can’t know Beats Antique until you’ve been a part of its journey and experienced the act as an entity with a life of its own. A stage show that demands more music; music that needs costumes, ships and masks, and shadow dances; an audience that comes for art, and takes away stories to feed their imagination.  When Beats Antique first drew breath, there was no pressure to become anything. The first album was just Zoe, David, and Tommy’s one-off experimental project for entertainment executive Miles Copeland, when Zoe performed with his Bellydance Superstars. From that creative freedom, a family formed, and in a good family, each member wears many hats. Tommy steers percussion, piano, and production. Zoe produces music, chooses themes, commands a circus of traveling set designs, creates costumes, and performs her breathtaking dance. David, a multi-instrumentalist is the captain of banjo, songwriting, and the mastermind behind the group’s hypnotic productions.

Some of the group’s productions are an organic evolution from the decades of experience each collaborator brings to the project while other pieces are written for specific shows. In deeply vulnerable interplay, every song is woven into a tapestry of danced and drummed story. Commitment to the full performance art form is how Beats Antique fuses musical worlds, pulling on global sounds for experiments on the fringes of cinematic cabaret, informed by electronic mash-ups and inspirations who have joined them on the journey such as Les Claypool, Bassnectar, Alam Khan, The Glitch Mob, and the Preservation Hall Jazz Band.  Each album and stage show has built upon the last. Notable highlights include performing at Red Rocks Amphitheater, a performance in Egypt on the day some said the world would end, and playing a hometown show at The Fox Theater in Oakland on the night Occupy Oakland was evicted and merged with their fans to light bonfires in the street and leap over the flames. Beats Antique aims to deliver a show anyone can enjoy, a circus that feeds the human spirit.  You can connect with Beats Antique via: WEBSITE | SPOTIFY | SOUNDCLOUD | INSTAGRAM | FACEBOOK | TWITTER