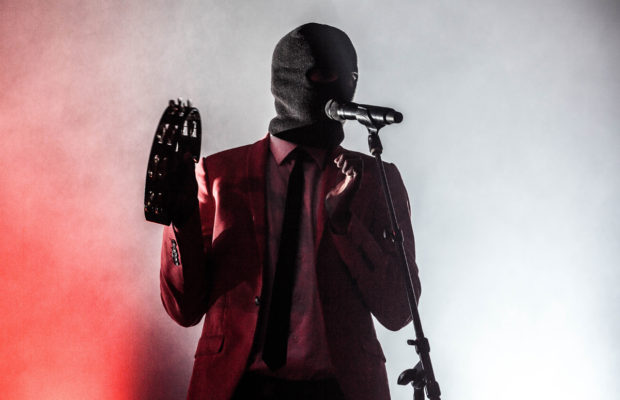 Photographs and words by Jess Williams

The multi-genre powerhouse band twenty one pilots took the music industry by storm in 2016 with multiple international tours and hit singles. This new year is no different for the band, who brought their Emotional Roadshow 2017 tour to the Barclays Center in Brooklyn, New York this past weekend. Their high energy set was preceded by indie-rock band Judah & the Lion and rapper Jon Bellion.

Judah & the Lion, hailing from Nashville, TN, graced the stage and kicked off their set with the faced paced “Kickin’ da Leaves”. Lead singer Judah Akers ran across the stage, from side to side, occasionally climbing on top of the drum kit and launching himself into the air. Judah & the Lion also showed the crowd that they had a more comical side with their “Bootywork” song which featured Akers on the auto tuned mic singing “Let me see that booty work, booty work boo-boo-boo-boo-booty work. Right cheek, left cheek” as the rest of the band lined up center stage and began twerking. Judah & the Lion let their freak flags fly and filled their short set with high energy.

Up next was Long Island rapper Jon Bellion, playing what was more or less a hometown show for him. Bellion did not “grace” the stage as much as he sprinted across the stage and began running back and forth while rapping the opening verse of “He Is The Same”. Bellion, who clearly had some fans of his own within the sea of twenty one pilots fans, never let the energy die down. Despite a 45 minute set, Bellion made sure to create a diverse and enthusiastic setlist that showed off his sound, including “All Time Low”, “Guillotine” and “New York Soul, Pt. II”.

Twenty one pilots was due up next, but not without a 45 minute wait in order to build up their fans anticipation. Ominous music played throughout the venue as a black sheet was drawn in front of the stage as crew members began to place Josh Dun’s drumkit and Tyler Joseph’s piano on the stage. As the clock struck 9, the music began to speed up before crashing to a silence and suddenly the infamous dots seen on Blurryface popped up on the screen. Then, a face with the Blurryface artwork on it appeared on the screen chanting the lyrics to “Fairly Local” before the curtain dropped and a transition into “Heavydirtysoul” began. The crowd erupted into a thunderous recitation of the lyrics… which didn’t stop for the duration of the entire concert.

Twenty one pilots had a full and diverse setlist for the night with songs ranging from new and old albums. The band performed 8 songs before venturing to the back of the venue to the B-stage where they performed “Ode To Sleep”, “Addict With A Pen” and their cover of MCR’s “Cancer”. The second half of the concert was no less energetic than the first, with Joseph climbing into the stage for “Hold on to You” (a classic twenty one pilots move”. The band then thanked their opening bands by bringing them back out on stage for a medley of covers which included the adrenaline pumping “Jump Around” by House of Pain.

Before concluding their length 2-hour show, Joseph took to center stage behind his keyboard and spoke to the crowd about their first time playing Barclays Center with Fall Out Boy in 2013. They felt that it was one of their worst shows and looked to the crowd to be so high energy during “Trees” that this show made up for it. The emotional crowd sang so loudly it was hard to hear Joseph as he sang the lyrics “I know where you stand, silent in the trees”. Of course the crowd did as Joseph asked and went absolutely wild during the end of the show when Dun and Joseph stand atop the crowd and have a drum battle while confetti and smoke bellowed from behind them. It was truly a night to remember.