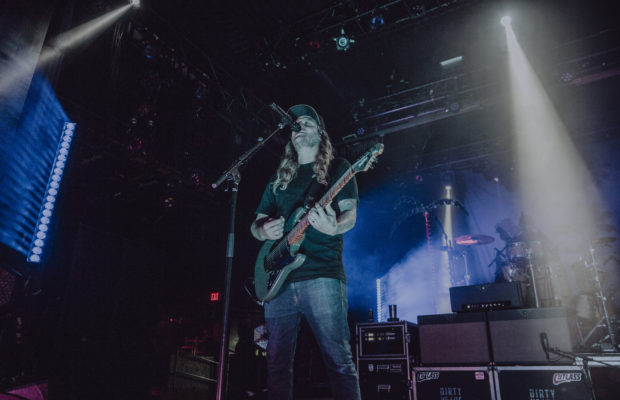 Dirty Heads with Jukebox the Ghost and Just Loud

On one of New York’s coldest nights so far this season, Times Square was transported to the sunny beaches of Southern California thanks to the Dirty Heads who were headlining Playstation Theater on Wednesday night. The band brought with them Just Loud, who were on their debut tour, as well as New York natives, Jukebox the Ghost.

Starting the night off on the right foot was the soulfully fun and entertaining Just Loud, who started their set with a ballad cover of Radiohead’s hit song “Creep”. The remainder of their 30 minute set was filled with high pitched loud falsetto’s and insane dancing across the stage back and forth. Without a doubt, Just Loud put 100% effort into their performance and definitely garnered some new fans out there.

Jukebox the Ghost was up next, ready to play songs both new and old to their hometown crowd. There were definitely some Jukebox fans in the crowd on Wednesday night as they opened with their hit song “Somebody”, before delving full throttle into their colorful set. Nearing the end of their set, lead vocalist, pianist and bassist Ben Thornewill took a moment to thank the lively crowd and advertise their annual halloween show called the “Halloqueen Show” — a tribute to Queen where Jukebox the Ghost plays a full set as themselves and then a full set a Queen cover band. It will be truly a sight to see.

Finally, the evening was truly ready to begin. The clock struck 10pm and the lights dimmed, causing the neon palm trees across the stage to light up. A red light landed on the backdrop on the stage and a cursive Dirty Heads logo became electrified. The Dirty Heads waisted no time and jumped right their set with their popular song “My Sweet Summer.” Dancing back and forth across the stage and bringing their immense reggae and rap talents to the forefront, the crowd was alive and well. In fact, they were thriving! Fans were jumping around, pushing up against the barricade, whatever they could do to get closer to the band and become one with the music. It was truly a treat to get to watch the band join in song with their fans. To me, a Dirty Heads show felt like more of a collaborative effort between artist and fan as lead vocalist, Jared Watson, held his microphone out to the crowd during “Burning Slow.” Among the lengthy setlist the band played, they made sure to include popular favorites across their entire discography including “Lay Me Down”, “That’s All I Need” and “Medusa.”

Being that this was my very first time seeing the Dirty Heads live, I have to say that they put on one hell of a show. With a stage setup and lighting rig as bright and colorful as their music and personalities, everything felt like it was in the right place. The happy vibes were flowing throughout the venue the whole night long and by the shows end it was clear that nobody wanted to say goodbye to the coastal community that was created within those walls on Wednesday night. I definitely recommend that you check out the Dirty Heads on tour!