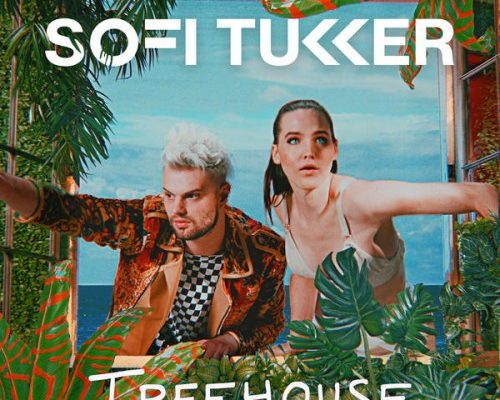 When you think of tropical house music, I can almost promise you that your mind does not instantly go to the grimy and cold streets of New York City. In fact, your mind goes to the exact opposite, right? Well, New York based electronic duo Sofi Tukker have created a sound all their own to take everyone (whether from New York or not) down to the islands to jam out. The duo will be releasing their highly anticipated debut album Treehouse through Ultra Music on April 13th, however we got an early sneak peak of the album and we’re going to tell you why you should definitely be saving this album to your Spotify and picking up the record in stores.

Sophie Hawley-Weld and Tucker Halpern are Sofi Tukker — see what they did there? Clever, right? The duo released their first music just under two years ago and since then, their songs have been featured in TV shows like Netflix’s The Incredible Jessica James, as well as in Apple’s iPhone X commercial and in video games like FIFA 18. What is perhaps the most commendable thing that Sofi Tukker has managed to do is score a Grammy nomination in 2017 for the Best Dance Recording, before their first record even came out! Well now the time has come and the duo are giving their fans what we’ve been waiting so long to hear: 10 of their infectious jungle inspired, island dance infused songs packaged into one album, so get ready to lose your mind.

Treehouse opens with Sofi Tukker’s previously released single “Fuck They”. A bold statement for the opening song of the album in which the first line goes “I don’t give a fuck about they.” The track is three minutes of unadulterated “let go” music — it’s the kind of song you listen to when you just wanna flip off the whole world and dance around. The majority of the album flows together as a collective piece and the common trap within electronic music is avoided successfully due to Sofi Tukker’s talent and ability to create such a diverse range of beats for their songs.

What I anticipate being the album’s quietest (in popularity) track is “Benadryl”, which happens to be my favorite. The song is a wistful mid-tempo track that showcases the duo’s witty sense of humor within their lyricism: “I lost my sanity with my socks/One at a time, I barely noticed.” While many of Sofi Tukker’s songs can be closely related to the musical sounds of the house music that was wildly popular in the 90’s, “My Body Hurts” is a more contemporary dance track that seems to be pulling influences from DJ’s like Calvin Harris circa Funk Wav Bounces Vol. 1. Sofi Tukker does not let the album sleep for a single second, even up until the last track, which is the duo’s hit song “Best Friend”. Talk about going out with a bang! Sofi Tukker conclude their debut album with an amplified dance track that was practically created for blasting it in your car with the windows down. Treehouse comes out at the exact sweet spot in that the duo has created songs that are going to explode over this upcoming summer, but they have been sweet enough to give their fans enough time to fall in love with each and every track before the summer weather hits!

You can watch the music video for Sofi Tukker’s “Best Friend” below and pre-order the album here:

Sofi Tukker has also announced a spring tour that will kick off in Washington D.C. at 9:30 club on April 18th and will conclude on May 27th in San Diego, CA at The Observatory North Park. You can check out all of the dates below and find ticket information on their website here.