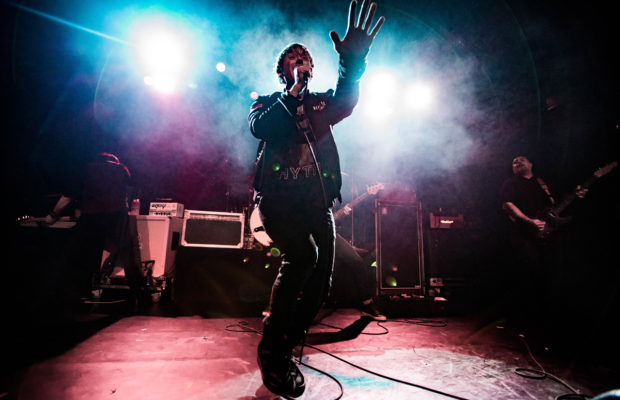 Who ever thinks of Sunday night as the night to go out and party? I know I usually don’t. But everyone who filled into the sold out Irving Plaza on Sunday night, was ready to party. Born in New Brunswick, New Jersey 20 years ago, Thursday was playing their second of two sold out shows… a homecoming of sorts. They brought along tons of friends to get the night started and by the time they graced the stage all hell broke loose — in the best kind of way.

Basement, who came a long way from Ipswich, England, started off the night. Having toured the US a couple of times prior, the band had collected some of their own fans among the crowd. Their short setlist was packed to the brim with songs both new and old include favorites like “Aquasun”, “Promise Everything” and “Covet”. What started as a seemingly calm night was turning into a riled up party as circle pit after circle pit broke out and a few crowd surfers came over the barrier. It was clear to see that Basement was enjoying it as much as the crowd was!

The final opening band of the evening, Touché Amoré took the stage around 9. Based on the opposite coast, Touché Amoré explained that it’s always such a treat to play NYC. Lead vocalist, Jeremy Bolm interacted with the crowd, reaching out for their hands as he ran from side to side. The energy was crazy inside Irving Plaza with sick guitar riffs and killer hair flips that only rockstars could pull off. Touché Amoré completed their 45 minute set after a commendable 16 songs, which included “The Great Repetition”, “History Reshits Itself” (which included Thursday’s Geoff Rickley on vocals) as well as their closing song “Honest Sleep” (in which they brought Cities Aviv back out).

What I thought was high energy during the opening bands sets, was nothing compared to how to crowd reacted when Thursday took the stage. Many fans, who returned to Irving Plaza for the second night in a row, were losing their minds from excitement. Lead vocalist, Geoff Rickley began the set on a sentimental note, thanking all of their fans for being there and supporting them, before explaining that the show would feature songs both new and old and a lot of them as they were going to be playing the longest set of tour to close it all out! Thursday didn’t waste a second of energy as they kickstarted into “Cross Out The Eyes”. The floor of Irving Plaza was shaking as the barricade wobbled back and forth, struggling to hold back the energy of the crazed crowd. The band played a 17 song setlist which included “Counting 5-4-3-2-1” (with Touché Amoré’s Jeremy Bolm on vocals), “Jet Black new Year”, “Division Street” and many more. In what seemed like the blink of an eye, the lights were dim and the stage was empty again, but the crowd wasn’t having it. The chants for a Thursday encore were alive and well within the walls of Irving Plaza as the band returned to the stage to finish of their set with “War All The Time” and “Turnpike Divides”.

While there’s so many new, up and coming bands in the pop punk scene it is always a treat to be able to see the “vintage” pop punk bands perform live. While I may have been in diapers when Thursday first released music, it doesn’t prevent me from enjoying their live performance 20 years later. These guys really prove that age knows no limit. The show was so high energy and passionate, it was inspiring to watch.