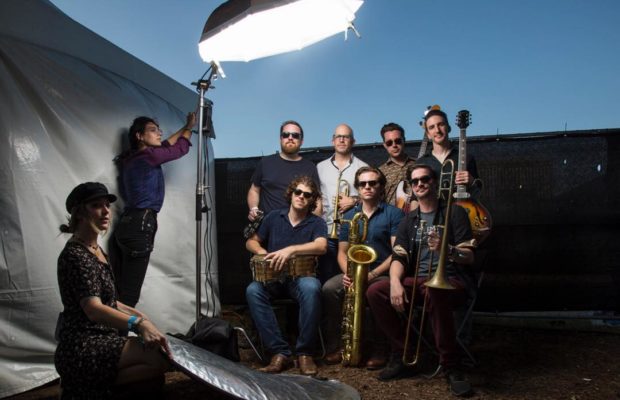 I was lounging around in the Austin City Limits press area with a bottle of kombucha waiting for an interview with Brooklyn based instrumental band Ikebe Shakedown suddenly I hear a familiar noise. It was Ikebe Shakedown performing their song track “Supermoon”. I peak over to see the band all seven members crammed into a local tent playing their heart out. Although I missed their early morning set I was happy I got to see them play even it wasn’t on a big stage. One part cinematic score, one part rhymes and blues, all parts awesome, Ikebe Shakedown is not like any other band out there. They’re music really defines labels and with their 2017 release The Way Home had been my soundtrack throughout my adventures in Austin. I put in my headphones as suddenly I was transported into being the star of my own cool 70’s spy flick. I don’t really know how to explain, but it’s cool. Members Nadav Nirenberg and Robin Schimdt took sometime to talk with me about navigating the music world as a large group, they’re writing process and much more.

Nadav: It’s a good opportunity to come and play place we don’t come to very often. We played a club show here [Austin, Texas] last night. This is our first time in Austin as this group. You also meet tons of nice people. Everyone’s here for a good time.

Robin: With people just wandering around they’ll wanderer into your set and hear your stuff.

That happened to me. I just heard the music and I followed it your performance over there. Are there any acts you’re excited about seeing?

Nadav: We’re pretty sad, we had some friends in Durand Jones & The Indication and as sometime happens when you’re playing a festival they went on at the same exact time as us. But I for sure want to check out Metallica and Nelly.

Robin: We’re back next weekend with Friday off so we a chance to check out more bands.

Navad: A lot of Brooklyn bands are playing next week too.

Ikebe Shakedown is a rather large band.

I got two for this interview, I feel like that’s a good turn out. Working with a lot of members and working with in various genres, how do you keep things from getting so muddled?

Robin: That’s a good question. We try to bring as many influences to the table while still having this groove based cinematic style. We’ve been doing it for ten years now and it’s evolved a bit. We compose more as a group now. We used to just bring in our own individual material.

Navad: The process has gotten easier, well not easier per say but we know what we’re going for and what this is supposed sound like now. We’re no longer trying to feel to feel it out. It’s amazing to have a large group of people to do that with.

And you guys all work equally together. There’s not Timberlakes.

Robin: Yeah there’s not sort of leader. It’s sort of unusual for this big of band to just be democratically run. It’s hard sometimes, but it totally pays off.

As an instrumental band, how does Ikebe Shakedown invoke emotions without lyrics?

Navad: That’s an interesting questions, because that’s what we do and that’s what we try to do and we’re trying to get better at it constantly. Writing these songs that you don’t without words people can put their own meaning to it. Five different people can a different reaction to one song. Not having lyrics to tell you exactly what to feel we really enjoy that. We try to have this up and down. Having a narrative to this song without words. We work really hard on it.

My last question because you guys are so cinematic and you’re described as such who are some of your favorite composters?

Nadav: For me number one is Isaac Hayes, he did a lot of amazing stuff. As far as like old school serious composers Bernard Herman is like my shit. He did Taxi Driver, Psycho, he did a lot of these amazing scores that really invoke a lot of incredible emotion.

Robin: There’s so many others, Curtis Mayfield is another one.

Navad: David Axelrod did so many cool stuff in 70s. And a lot of spaghetti western composers for sure.