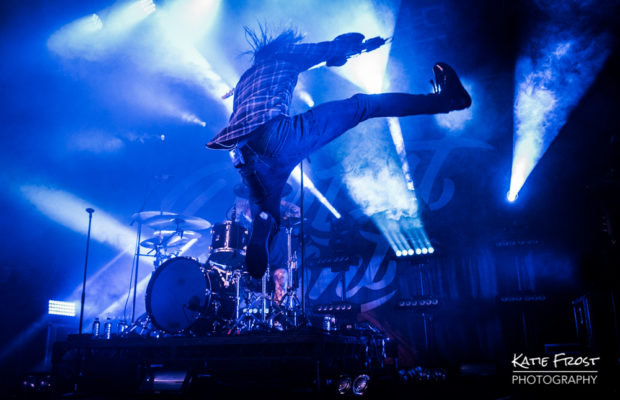 Our Last Night with Hands Like Houses, Hawthorne Heights and Jule Vera

Tonight’s show was a special co-headliner featuring Our Last Night and Hands Like Houses. Last I heard the show was just a few tickets short of selling out, and the Electric Ballroom in Camden was packed to the rafters with alt-rock fans of all ages, ready for a brilliant evening of music!

First to hit the stage were alt-pop quintet Jule Vera from Alabama Their music was groovy and up-beat and went down very well with the crowd. When vocalist Ansley wasn’t bouncing around the stage she was strumming a ukulele, and the guys in the band were just as animated. They played a short but sweet set featuring tracks from their 2017 album Waiting On The Sun, including “10,000 Hours” and “Bad Company”.

Next up were Hawthorne Heights – a four-piece rock band from Ohio. Vocalist JT told the crowd that all he wanted was for everyone to be happy and have a good time, and he certainly achieved his goal. The band have been around for years (releasing their debut album in 2004) and have built up a solid following in that time, so the majority of the crowd seemed to be familiar with their songs; many singing along and waving their arms in the air. The band played a great set featuring tracks from their latest album Bad Frequencies which came out in April of this year.

Main support tonight were Hands Like Houses, who have just completed a 5-date headline tour of the UK. It has been almost two years to the day since I last saw the band play London at a very special intimate show which saw them play their third studio album Dissonants all the way through. Two years on the band are back with a brand new album Anon that was released earlier this month, so I was looking forward to hearing some of the new songs live for the first time. Bounding onto the stage they opened their set with “New Romantics” and “Colourblind” from their 2016 album Dissonants before playing new track “Monster” from Anon. The new track blended seamlessly with the sound of the band’s older tracks and sounded great live. The Aussies went on to play a fantastic set featuring not only tracks from Anon but some absolute classics from their back-catalogue including “No Parallels” and ended their triumphant set with one of my personal favourites – “I Am”.

Headlining tonight were New Hampshire alt-rock band Our Last Night, who I saw for the first time when they supported Tonight Alive back in 2016. I remember really enjoying their set, particularly “Sunrise” from their 2013 album Oak Island. By the time the band took to the stage the crowd were pumped from the brilliant bands who had already played and as the boys took to the stage there was a huge roar of excited cheers from the crowd. The band’s performance was full of energy from the very start, with vocalist Trevor bounding around the stage jumping on and off the step at the front of the stage, while his brother Matt (guitar and vocals) and Woody (bass) were just as animated, while Tim beat the hell out of the drums. Our Last Night played a wonderful set featuring their latest singles “Fantasy Island” and “Soul Speak” as well as fan-favourites from their extensive back-catalogue. It was a great night of live music and everyone in the room seemed to be thoroughly enjoying themselves…I even heard that one of my fellow photographers went crowd-surfing!

Our Last Night, Hands Like Houses, Hawthorne Heights and Jule Vera now head to Europe to play ten more shows together – tickets and further information can be found on the band pages below: