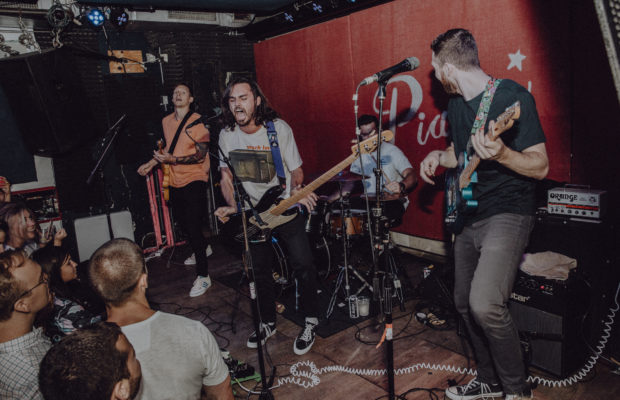 Connecticut based pop punk band, Chousand, took New York City by storm on Friday night as they crammed their friends and family into the Lower East Side’s Piano’s for their sold out album release show. Having released their debut self titled album back in May, Chousand really lived to take advantage of the “better late than never” saying.

The night was young despite the clock striking 11pm by the time the band graced the stage. The energy was still high, fans had been saving it all for the main act. Within seconds of the band opening their set, a mosh pit opened up in the middle of the venue. Now, let’s not forget this venue is in the back of a Manhattan bar. A mosh pit in a venue of this nature resulted in drinks flying, fans spilling PBR and Vodka Cranberries all over themselves, hair being pulled and lyrics being screamed in each others faces. Despite the seemingly harmful attitude of the venue on Friday night, all was well in Chousand world. This night was just another night at a Chousand show.

For a “local” band, Chousand defies the stereotypes and proves that they are definitely not the typical local band. In fact, their music, talent and overall genuine caring and nice attitudes set them apart and soar them above and beyond other local bands. Having been a fan of Chousand for a couple of months, I was stoked when I was able to attend this album release show and after hearing my fair warnings of how crazy a Chousand show is, I was a little weary. But, let me tell you, their shows are some of the most fun you will have and it was definitely the perfect way to say goodbye to summer. I predict that by this time next year, Chousand will be headlining the bigger venues, on tour bills with some of the pop-punk greats and taking the industry by storm.

My advice? Hop on the bandwagon now so that you can say you knew Chousand way back when!