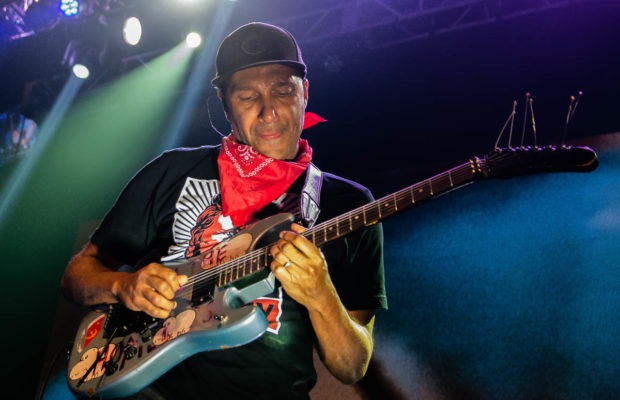 Tom Morello with The Last Internationale

Tom Morello has had an impressive and expansive music career, but late last year saw him release his first solo album The Atlas Underground.  Touring in support of the album, Morello made a stop in Louisville, Ky to perform to a packed house.  Although many bands start out their sets on stage, Morello delighted the fans in the crowd by starting his set with “Lead Poisoning” on a platform in the crowd.  The fans surrounding him were mesmerized and slightly giddy to be standing so close to the iconic performer.  An incredibly expressive performer, Morello was clearly having a great time and was feeding off of the energy from the crowd.  After two more songs on the floor, Morello left the platform and walked onto the stage to perform the remainder of the set.  Performing his set against the backdrop of a large screen showing a variety of protest videos, statements such as “Nazi Lives Don’t Matter” and political messages that encompass his views as a longtime political activist, Morello performed many songs that ranged from his time with Rage Against The Machine, Audioslave, Bruce Springsteen and the E Street Band and his own solo material.   Performing medleys of music from Rage Against The Machine that included “Bulls On Parade” and “Testify”, as well as tracks from Audioslave that included “Cochise” and “Like A Stone”, Morello kept the crowd in high spirits and singing along to his incredible guitar playing.  Towards the middle of the set he gave a touching tribute to Chris Cornell by acoustically performing “”Save The Hammer For The Man” and “The Garden of Gethsemane”.  Towards the end of the show, Morello asked the crowd “I’ve got one last question for you Louisville.  Are we in this together?  Then why am I up here and you’re down there?  Please join me on stage for this next song”.  He had 2 rules for the crowd coming onto the stage telling them “Don’t step on my shit and if you put a cell phone in my face I’m gonna throw it”.  Thanking the fans for being there, the venue, his band and his friends and family for being there this night, he launched into the Rage Against The Machine Hit “Killing In The Name”.  With Morello shredding on the guitar, the audience was more than happy to sing the vocals.  It was truly a special sight to behold!  The crowd, both on and off the stage, were going crazy, singing along with their fists in the air.  He then ended the set with the John Lennon track “Power To The People”.  As the show ended, Morello left the crowd buzzing with energy and excitement from such an incredible evening.  New York rock band The Last Internationale opened the show.