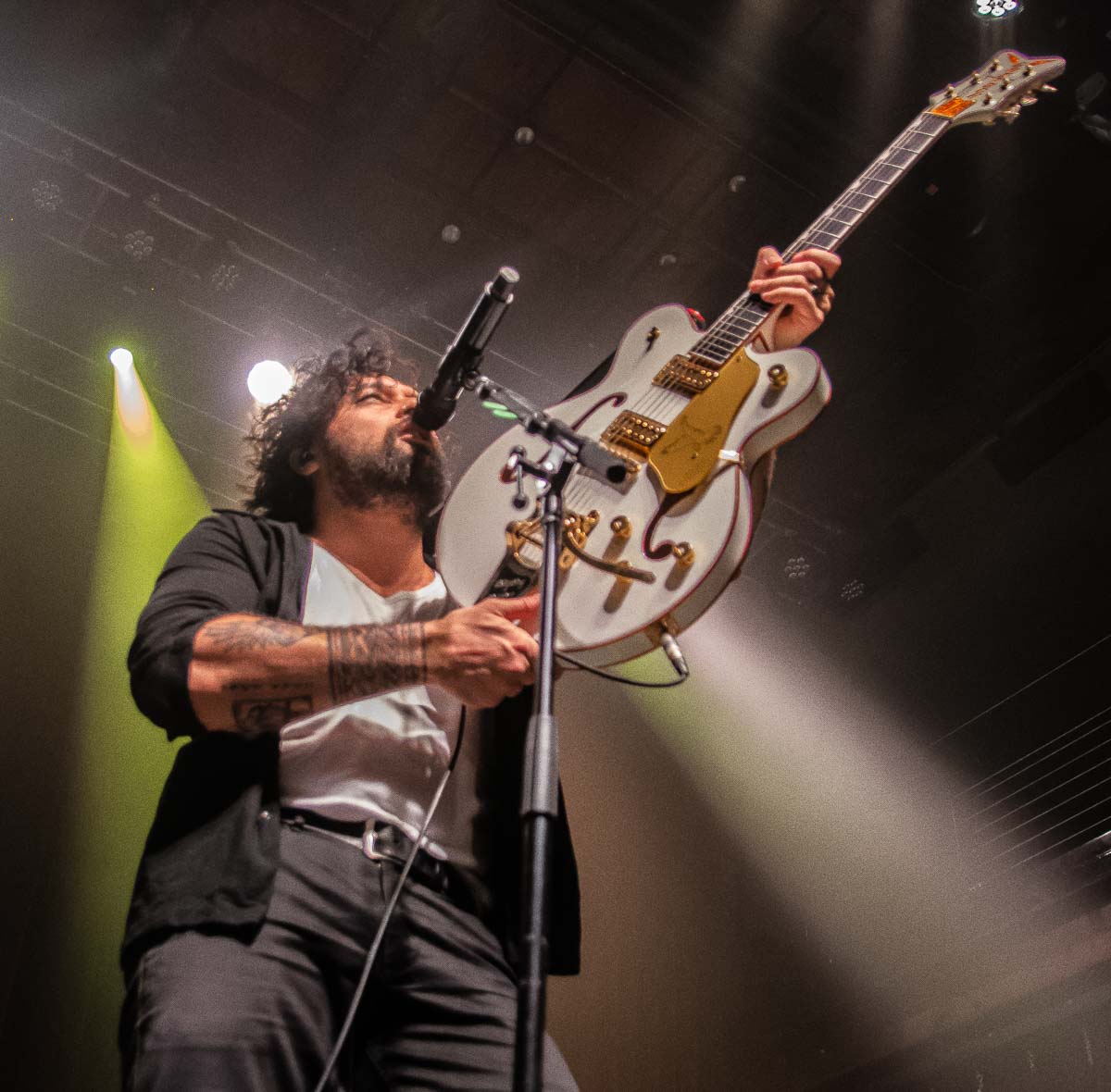 Gang of Youths with Casual Male

Have you ever attended a concert with no idea what to expect and been completely and totally blown away? This was my experience on the evening of April 25th when Gang of Youths brought their current tour, in support of their latest album angel in realtime., to Louisville, KY.  It was one of those instances of being aware of a band and hearing their music but not having an idea what to expect from their live show.  Although well below a sold-out capacity, the crowd of @ 200-300 people were such visibly passionate fans that their energy made it feel like a sold out show. The venue did not set up the barricade this evening, making it an even more cozy and intimate experience for the fans.  Opening the show this evening was Brooklyn musician Tim Lappin, performing as his current project Casual Male Band.  Coming out on stage wearing a casual white suit, he was the epitome of a casual male!  Performing solo alongside his guitar pedals and a stereo sitting atop a covered table playing music on a cassette tape, he had the crowd enjoying his fun and electronic tinged songs quickly.  Chatting quite a bit with the crowd between songs, Lappin had the crowd laughing throughout his set with his steady stream of humorous banter.  At one point he told the crowd that unfortunately the only merch he had for sale in the back were cassette tapes of his EP saying “I’m sure you are wondering what you are supposed to do with a cassette tape!  But what the hell am I supposed to do with 1,000 cassette tapes?”, to which everyone laughed.  Singing plenty of songs from his Raise The Dead EP, he seemed to make a genuine connection with the crowd and I have no doubt that he made plenty of new fans this evening!

The crowd was noticeably restless as they awaited Gang of Youths.  As the dimmed lights came up, the band took the stage, clapping and bowing to the fans who were ecstatically cheering them on!  Opening their set with “the angel of 8th avenue” and “the man himself” from angel in realtime., as well as “Heart Is A Muscle”, singer David Le’aupepe was all smiles as he danced across the stage. Thanking the crowd for their warm welcome and saying that it was the band’s first time in Louisville, he then talked a bit about the garden his father had tended when David was growing up and how no matter how much the city surrounding his childhood home had changed over the years, that he would always associate that little plot of land as home. He went onto tell the crowd to find that place that feels like home and fight like hell to hang onto it before launching into “tend the garden”. Singing many songs from their latest album, you could visibly see how personal the album is to him as he sang the songs and how deeply he felt the words as he sang them.  A bundle of energy throughout the set, David glided gracefully across the stage as he sang, directly connecting on a deep level with the fans in the crowd, often shaking their hands and standing and kneeling at the front of the stage, singing in unison with the fans.  The band as a whole was having a great time together on stage and were feeding off of the energy in the room.

A few songs into the setlist, David told the crowd how the band didn’t think so many people would show up and made a reduced setlist designed to get people who were not familiar with the band to  get into them.  He went onto to thank the crowd again for coming out and said that maybe they would end up playing an encore, asking “Do you understand how much I love everyone here?”!  Sitting at the piano on stage, David then started playing and performing “brothers”, a beautiful track from angel in realtime..  About halfway through the song, the piano cut out and David finished the song acapella.  It is not too often that you find a crowd of fans who are respectful enough to not make a sound, but the only sound you could hear in the room was the sound of David’s voice and, at times, the sound of the crowd singing along.  It was a beautiful moment that gave me chills!  Going onto perform “forebearance”, “Magnolia”, “The Deepest Sighs, the Frankest Shadows”, and “in the wake of your leave”, they ended their set with “goal of the century”, with the crowd singing along in unison!  The band briefly left the stage before coming back out for one more song.  Ending the night with their hit “Let Me Down Easy” from 2017’s Go Further in Lightness, it is an upbeat and danceable tune that was the perfect end to perfect evening!  David told the crowd that he hopes they can make it back to Louisville soon and I have no doubt that everyone in attendance this evening is making the same wish!