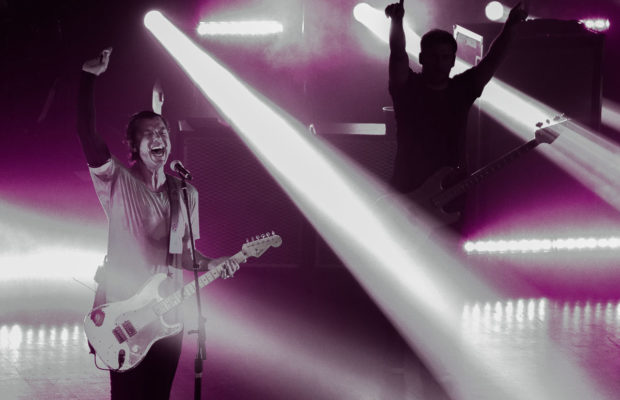 British rock band Bush brought their current tour to Louisville, Ky recently.  Having been together on and off for 26 years, the band has amassed a large and passionate fan base over the years.  With an array of colorful lighting throughout the show, Bush performed many of their hits, including “The Chemicals Between Us” and “The Sound of Winter”, as well as several songs, including “This Is War”, from their 2017 album Black and White Rainbows.  Rossdale is an incredibly expressive singer, the emotion visible on his face with each song.  It was very apparent throughout the set that the band loves and appreciates their fans.  With a pit set up in front of the stage, Rossdale, as well as guitarist Chris Traynor and bassist Corey Britz, often stood at the front of the stage, performing directly to their fans, shaking their hands and posing for cellphone videos!  During several moments throughout the set, Rossdale was in the pit performing amongst the fans much to their delight, a smile on his face the entire time.  The band ended their set with their hit “Little Things”, during which time Rossdale jumped off of the stage and made his way through the entire venue, including the balcony.  The fans went wild, hoping Rossdale would get close enough to them for a hug or a handshake!  After making his way back onto the stage, the band finished the song and briefly left the stage, quickly coming back out for a 4 song encore.  The encore started with “Machinehead” and was followed by an amazing cover of REM’s “The One I Love” and then “Glycerine”, which saw Rossdale on stage alone with his electric guitar.  The band ended the set with “Comedown”, with the entire venue singing along and cheering.  Bush is a dynamic live band and gave their fans an amazing evening of music!  Atlanta rock band Big Jesus and Australian indie synth pop band Atlas Genius opened the show.