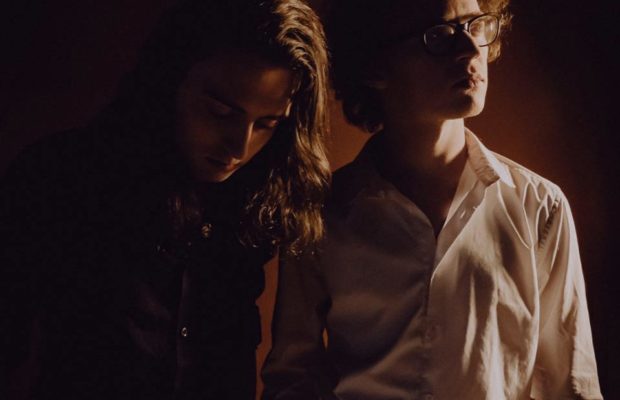 Although new to the scene, Indie-electronic band Sleeping Lion, comprised of Nate Flaks and Noah Longworth McGuire, is already forging their own path in the industry and garnering plenty of critical praise along the way. Having started out in a folk band, Nate met Noah and quickly changed musical direction to a more electronic sound, sporadically mixing in elements of folk and jazz. Although the duo are from Boston, they recently packed their things and headed west to sunny LA, hoping for a fresh start and new inspirations. Having released their debut EP Patient Creature in 2016, followed by the release of their newest single including “Stop It” and “Easy For You”, the band is forging ahead towards a bright future. Using the momentum they have created so far, the duo has high hopes for 2018 and beyond! Our staff writer, Emily May, recently spoke to Nate Flaks, in which he talked about the formation of Sleeping Lion, the recording process for their EP, their Spotify playlists, getting industry advice from a then unknown Halsey and their move to LA. You can learn more about the band and stay up to date with new music and upcoming tour dates on their website, Facebook, and  Twitter. You can hear their newest single “Easy For You” on Soundcloud here and on Spotify here.

EM: You two were roommates in Boston in 2015 when you decided to form Sleeping Lion. I read that you started out in a folk band together but quickly transitioned to electronic music. What led you to change genres and where did the name Sleeping Lion come from?

NF: The change from folk to electronic (and eventually pop) was perpetuated by three unrelated musical things happening around the same time.  I had been in my folk band (The First Law) for over five years by the time Noah had joined it and I was starting to get frustrated by the limitations I had imposed on the project.  Noah and I didn’t know each other particularly well at the time and we only really practiced once a week, so in his free time he had started getting into electronic production.

So by April 2015, I’m tired of making folk and Noah’s making electronic instrumentals, but neither of us knows these things about other.  What lit the spark was a chance encounter I had one night in Cambridge.  My girlfriend at the time had gone to a sold out show at The Middle East and I met up with her after the show.  When I arrived, she was talking one-on-one with a blue-haired woman who I figured was the artist.  I wound up also talking to the artist for a really long time and listened carefully while she talked about the music industry and the new gatekeepers of pop (HypeM, Spotify, etc.).  She was fascinating and inspiring- she saw her future success with an incredible clarity and certainty.  She made the industry sound like a puzzle that could be cracked with the right blend of strategy, hustle, ambition, talent, and creativity.  She was right too, as it goes.  I spent an hour that night talking to Halsey.  When I got back to my dorm that night I overheard Noah working on a beat and my head started spinning as everything came together.  I said, “Noah, we’re in the wrong band!” and he looked confused and said, “it’s your band.”  So that’s how we started.  As for the name: when I was in high school I made short films.  The first shot of the first film I made had my best friend (who’s last name meant “lion” in Italian) asleep on a desk so I called my films “Sleeping Lion Productions”.  Noah liked the name when he saw the films so it stuck.

EM: Did you both grow up in musical homes? Who were your musical influences growing up and who are some current artists you are influenced by?

NF: We both grew up in musical homes.  My father was a keyboardist in various bands, my mother was a theater teacher, and my grandmother (my first piano teacher) was an incredible classical pianist.  Likewise, Noah’s father sang and played guitar and encourage Noah to be a multi-instrumentalist.  I grew up on my parent’s blend of prog rock (like Yes) and show tunes (like Pippin) before developing my own taste for piano-rock/folk (The Fray, Bon Iver, Gregory Alan Isakov, etc.).  Noah grew up with a similar combination of genres hearing prog-rock from his dad and show tunes from being in his school’s theater program.  Now we’re influenced by a range of artists like The 1975, Lido, Bon Iver, and Jon Bellion.

EM: You released your debut EP entitled Patient Creature in 2016. I read that most of it was written over Skype, as you were both living in different locations at the time. What kinds of challenges did that method of writing an album present? What is your songwriting process currently and what inspires your lyrics?

NF: I know it’s counter-intuitive, but writing the record like that was actually fairly easy (save for the timezone math) and the hardest part of the process was when we were back in the same room.  Our process doesn’t have a lot of overlap- I usually either write a piano/vocal demo or topline over his instrumentals and then send it back to him to produce.  The lyrics for our songs are primarily inspired by lower points of my life- failed relationships, family issues, and mental health.  With that said, writing with other artists has opened me up to writing more universally and trying to find lines that express feelings we (i.e. others artist & I) both feel.

EM: Your EP has been described as combining electronic, folk and jazz sounds. Was it your intention when you wrote the album to combine different genres of music or is that just how the songwriting progressed?

NF: I want to say yes, but the honest answer is that we really didn’t know what we were doing at the start.  We had backgrounds in these various genres so when the “electronic thing” pushed us out of our comfort zone, we’d rely on folk/jazz elements to make it feel familiar again.  As we progressed we recognized that this was what set us apart and developed our sound around that with more intention.

EM: You guys have done several remixes for other artists. How did that come about?

NF: Each remix we’ve done has a different origin story, but the unifying theme is that we really like making music friends and reimagining their songs.  Some remixes came from artists we’ve opened for, went to school with, or met in Boston/NY/LA/ or online.

EM: Sleeping Lion played SXSW this year. What were some highlights?

NF: Our friend Grant Owens (We Found New Music) had an incredible showcase with an amazing lineup.  We got to see NoMBe, Kim Petras, morgxn, Dermot Kennedy, and Billie Eilish in the same night!  Also we got to see a lot of our friends and meet some amazing people!

EM: I saw that you release monthly playlists on Spotify. What inspired you to start making the playlists?

NF: I really appreciate this question!  I had a radio show in college and I love making playlists/mixtapes for friends!  I also feel really luck to know a lot of talented undiscovered artists (& I’m always looking for new up-and-coming artists) so the monthly playlist felt like a great way to satisfy my mixtape-making hobby while also sharing new (& sometimes unknown songs) with our followers

EM: You have done collaborations with several artists. Are there any that you would consider favorites and are there any particular artists you would like to collaborate with in the future?

NF: It’s hard to pick favorites because the artists we’re working with run a range of genres and styles, but there are some particular songs I’ve written with these artists that I feel really connected to.  So far, we’ve been lucky to work with Phangs, Vesperteen, Transviolet, Emilia Ali, VALNTN, Paxton Ingram, Evangelia, Miette Hope, Hailey Knox, Sugi Dakks, DAVVN, Kyan Palmer, and Aire Atlantica (to name a few) so it’s been a great few of months of writing and producing!  With that said, in the future, we’d love to collaborate with RKCB, Vancouver Sleep Clinic, Shallou, SHY Martin, Ella Vos, Lido, Billie Eilish and Chance the Rapper.

EM: You recently relocated from Boston to LA. What prompted the move and what are some of the differences that you have noticed between the music scene in LA compared to Boston?

NF: The move to LA was a no-brainer.  We had made a lot of LA friends (via the internet) prior to the move and a lot of our friends in Boston were graduating and moving out West as well.  Unfortunately, Boston doesn’t have a lot of industry attention and there isn’t a unified scene like there is in LA.  LA has a lot of opportunities for up-and-coming artists to collaborate, network, and showcase their music.  Despite LA being a much larger city geographically, I often see the same faces at events and shows whereas I didn’t in Boston.

EM: You released the single Stop It last year, recording a stripped down version of the song as well. What was the inspiration behind the song and what led you to record two versions?

NF: The short answer to the first part: my ex-girlfriend and I wrote and recorded “Stop It” together while were in the midst of breaking up as a means of working through it.  When it was released, the blog Gems & Secrets called it “a rippling kaleidoscope of a break-up in real-time” and I think that about sums it up.  The stripped version was inspired by the opportunity to actually record it!  We were nominated for Boston’s 617 Sessions and as part of the nomination we received a day of free studio time.  Since the song was so personal and well received, we figured that a stripped version would highlight the authenticity of the song and call back to our history as folk artists.  We worked with our friend Jesse Hartov (arranger for our song “By Now You Won’t”) who arranged strings for a trio (Bengisu Gokce, Cristobal Cruz-Garcia, and Jenny Frantz).  We also had Natalie Knezevic sing on this version, which meant a lot to me because Natalie had been in my folk band (The First Law) when I was in high school.

EM: You guys had a pretty remarkable year last year! What’s next for the band? What are your goals for 2018?

NF: Thank you!  It’s been an exciting year and things have been moving in a really great direction since arriving in LA.  Our goals for this year are to release much more music, continue writing/producing with artists we vibe with, and travel/perform often.  (I have a list of 200 goals I made on New Years day, so I’m narrowing it down and sparing you the details).  Keep listening, stay on the lookout, and be ready!

Check out Sleeping Lion’s single “Easy For You” below: