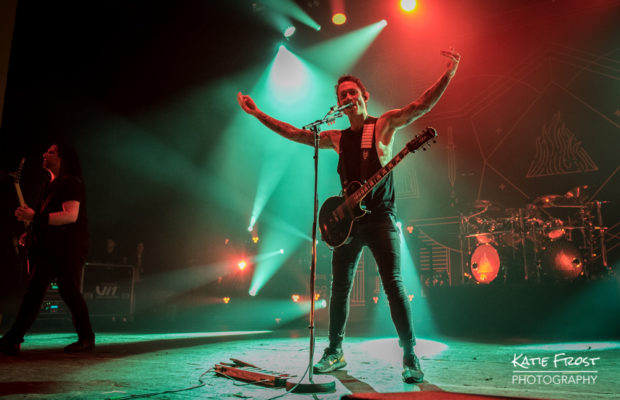 It was a sunny Saturday evening in South London and the last of a five-date UK tour for heavy metal heros Trivium at the legendary Brixton Academy. Doors were at the earlier time of 6:00pm and when I arrived it was great to see so many fans already queuing outside the venue, keen for the evening of metal to begin!

First to hit the stage just thirty minutes after doors opened were death metal five-piece Venom Prison from the South Wales, who launched straight into “Abysmal Agony” from their widely-acclaimed debut full-length album Animus (originally released in October 2016, deluxe edition released in February 2018). There has been a lot of hype around the band, who were crowned “Breakthrough Band” at The Heavy Music Awards last year, so I was looking forward to seeing them live…and they certainly didn’t disappoint! Their performance was ruthlessly heavy from start to finish, with Larissa’s ferocious vocals working perfectly alongside the blistering riffs and thundering rhythm coming from the rest of the band to create a wall of noise of the best possible kind. The band played a brilliant set, largely featuring tracks from Animus, before ending their set with “The Primal Chaos”, from their 2015 EP of the same name.

Next to rock the faces of the Brixton crowd were thrash metal quintet Power Trip from Dallas, Texas. These guys wasted no time in getting down to business, opening with “Soul Sacrifice” from their latest album Nightmare Logic (2017). However just a few songs in everyone became aware that something was happening in the crowd, so vocalist Riley Gale asked if someone was hurt before pausing their set until the issue was resolved. Kudos to the band for ramping the energy back up…which they had to do yet again as there was further disturbance in the crowd. It must have been hard for the band to pick the tempo up not once but twice after having to pause their set, but they powered on, full of energy, to complete their performance, which was brilliant. Power Trip are definitely a band I would go to see live again.

Third on the bill tonight were hardcore punk band Code Orange from Pittsburgh, who opened their set with “My World” from their 2014 debut studio album I Am King before launching into tracks from their most recent album Forever (2017). Unfortunately there was further disturbance in the crowd during their set, which had to be paused while a couple of members of the public were ejected by security. Just like Power Trip before them, Code Orange wasted no time in ramping the energy-levels back up once they knew everyone was alright. Code Orange are one of the most energetic bands I have attempted to photograph and their set was deliciously heavy, featuring some stonking tunes, including their Grammy-nominated single “Forever”. Every single member of the band were giving 110% and their set was a tour-de-force of punk/metal.

Last to take to the stage were tonight’s headliners Trivium who got the crowd going by playing the Iron Maiden classic “Run To The Hills” over the speakers just before taking to the stage. The band were met by a wall of cheers from the crowd as they launched straight into “The Sin and the Sentence” from their eighth studio album of the same name (released at the end of last year). The band looked like they were thoroughly enjoying themselves from start to finish, with vocalist Matt Heafy regularly sticking his incredibly long tongue out and occasionally throwing his head back with a look of pure happiness on his face. Trivium were loud, fierce and full of energy, just like their fans – some of whom in the front row had come all the way from Germany! Tonight’s show wasn’t incredibly close to being sold out and Brixton Academy heaved with close to five thousand fans enjoying an evening of metal.

With eight studio albums under their belt Trivium had no shortage of material from which to put together their set. Tracks from The Sin and the Sentence were interspersed with some of their older material including “Ascendancy” from their 2005 album of the same name, and “Throes of Perdition” from their 2008 album Shogun. Trivium’s sound is hard to categorise into just one genre, with elements of metalcore, thrash metal, prog, melodic death and even groove metal. The songs the band chose to include in their set was sure to have pleased new and old Trivium fans alike, and the show was brilliant. Despite some issues earlier on in the evening, and someone chucking a full cup of what I hope was beer over my head as I was photographing Trivium, I had a great evening.

The Sin and the Sentence

Inception of the End

Until the World Goes Cold

Thrown Into the Fire

The Heart From Your Hate

Shattering the Skies Above

Pull Harder on the Strings of Your Martyr