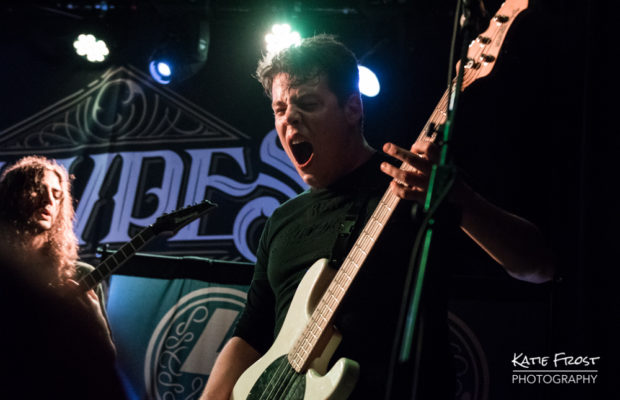 At 7pm doors to Boston Music Room in Tufnell Park opened and just thirty minutes later Cardiff five-piece Holding Absence took to the stage. The band didn’t let the sparse early crowd dampen their spirits and put everything they had into their performance, which was full of energy and emotion.

Next up were Hertfordshire alt-rock band Chasing Cadence who played tracks from their recently-released debut EP ‘Destroy Something Beautiful’. The venue was still far from full at this point but the band made use of the space jumped down off stage to play in-amongst the crowd.

I have seen Press To MECO once before at Fort Fest this summer and they are definitely a band worth keeping an eye on. They describe their sound as “progressive hardcore rock metal pop” and I think that is a fair description, as it is hard to fit these three guys from Crawley / Croydon into a specific genre. Their sound is a mixture of technical instrumental breakdowns, well-penned lyrics and three-piece harmonies. They released their debut album ‘Good Intent’ in October 2015 and the went down very well with the crowd. Vocalist Luke Caley invited a lot of crowd-participation during their set and everyone was very obliging.

Headliners SHVPES are a melodic hardcore band from Birmingham, fronted by Griffin Dickinson, son of the mighty Bruce (of Iron Maiden). This is their first ever headline tour and their excitement and energy was palpable. Griffin was front-flipping and stage-diving, and the packed crowd were loving every minute.

Towards the end of their set, former bassist Oliver Pike joined the band on stage to play with them for the first time since December 2015. Pike had been with the band since its inception (when they went by the name of Cytota) but left shortly after the completion of their debut album ‘Pain. Joy. Estacy. Despair’ in March 2016.

SHVPES are currently on the road with Press to MECO and will return to London in February to support Trivium at The Roundhouse.