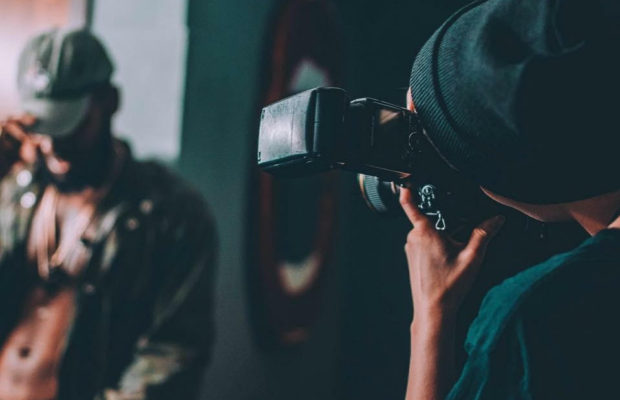 Getting her start photographing local hip hop shows in the Seattle area, Zoe Rain began working with Macklemore & Ryan Lewis in 2010 and soon became their full-time photographer and videographer, touring around the world. With work featured in Rolling Stone, Billboard Magazine, and The New York Times, Zoe has also worked with a number of artists including Chance The Rapper, Sam Smith, and Mary Lambert. With an impressive portfolio and years of experience some could only dream of, Zoe chatted with editor Rachael Dowd and talked all about where her career began and how she ended up touring with one of the most famous acts in the world.

I got one of the first point and shoot cameras when they were all the rage around 2004 and would take photos of flowers, my shoes, and bugs. I entered a photo contest of spiders when I was about 9 or 10 and was a finalist, which meant it was displayed at the Woodland Park zoo in Seattle.

I learned photography first from self help books I would read as a kid, from studying magazines, searching for patterns, color, and interesting subjects. Then I learned from my mentor Jason Koenig (StudioJkoe.com) and got a lot of practice. I also took a year of Commercial Photography at Seattle Central Community College in Seattle’s Capitol Hill.

The first show I ever shot was a Macklemore and Ryan Lewis show, at the release of their first EP together, at a small venue in Seattle called The Nectar Lounge.

You began working with Macklemore & Ryan Lewis back in 2010 and since then, you have toured with them around the world and more. How did you begin working and touring with them?

I had an in with Macklemore and Ryan Lewis, so I shot a lot of shows and just forced myself to get to know the local scene. I shot music that I enjoyed, because if I enjoyed it, I was sure other people would too. I ended up being asked to shoot Macklemore’s tour in 2013 simply because my work had gotten better, they knew me, and they trusted me. Once I had some tour experience and some connections with other artists, my work progressed.

When you are on tour, what does a typical day on the road look like for you?

Wake up, check where you are, check email. Coffee. Explore. Make sure you are aware of what the artist is doing as much as possible. Shoot the show. Edit the show all night. Dropbox photos of the show before artist wakes up. Sleep.

I have a lot of styles based on what it is I am shooting. I think every separate category for my work (live music, portrait, wedding, film, fashion, event) showcases a different process of shooting and editing my images to match specific feelings and aesthetics in that genre. It’s almost like having multiple personalities within the umbrella of photography. If I could use some words I hope people would use describing my work, I would say edgy, observant, clean, raw? That’s a hard question.

I can’t choose!! Usually the first ones you see on my website are my favs.

It can help, especially in concert photography. Low light shooting requires fast lenses (f1.2 or f1.4) in order to get the crispness you need. But I think you can do amazing things with simple tools, including your iPhone!

You are now a full time photographer and videographer, what has been a highlight for you since beginning your career in photography?

Tour will always be the highlight. And seeing my work in print, especially on the cover of a magazine. It is hard to describe how incredible it feels to hold work in your hands. I made a magazine to sell on the Macklemore tour (http://macklemoremerch.com/products/photo-book) that took me so long and is a product of years and years of work and photography.

Shoot. Be present in the artistic and creation oriented community around you. Be smart about what work you show, and on what platform. Intern for someone. Shoot. Shoot. Shoot.

Photo of Zoe by Dyllyn Greenwood