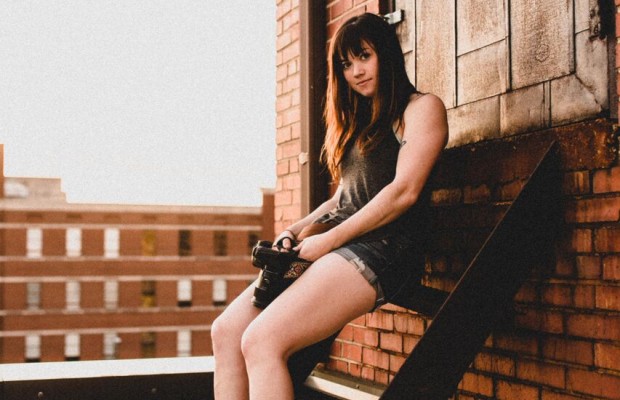 From hitting the road on Warped Tour to snapping photos across the country, it is likely her work has appeared on your social media feeds over the past few years. Fresh off the Neck Deep and State Champs world tour, Seattle-based photographer Kelly Mason opened up to Stitched Sound this month about how she got her start in the music scene and why individuality and hard work helped get her where she is today.

My earliest photography memory involved stealing my mom’s 35mm Canon film camera and taking pictures of my cats, and from then on it seemed like I got a new type of weird film camera to play with every Christmas. Disposables ruled my life and cash supply for several years as well, but it never really occurred to me that I was “into” photography until I was about 16. I just liked taking pictures of my friends!

Definitely a combination of both. I took two photography classes in high school where I learned basic composition rules and how to use the darkroom. My teacher consistently told me my work was awful until I turned in three concert photos from my point & shoot digital camera for our final project, to which he said “these are really good” before storming out of the room in his typical fashion. The same teacher also threatened to expel me once. We had a great relationship. Anyway, aside from that and one class in university, I’ve learned mostly from experience. Working for another music photographer and staring at his work for 4 years also helped seriously hone my eye.

For music photography, this is definitely an unfortunate truth. You need a camera that can handle low light like a champion to capture truly great images. This is a struggle I have even with the 6D, but I honestly believe that learning with “subpar” equipment can make you a better photographer. A perfect photograph to me is a combination of great lighting and thoughtful composition that flatters the subject and makes you want to keep looking—and it takes time for these details to all become second nature while shooting. Equipment nor editing has nothing to do with any of this. You can take amazing photos with an iPhone or disposable camera if you know what you’re doing.

Haha, what a nightmare that was! I think I shot Blane (now American Island) at El Corazon with Goodnight Sunrise in 2005 and all of my photos were black. I remember frantically messaging my photographer friend on MySpace asking for advice, and with his help I got maybe one photo that wasn’t complete crap. My first big show was Underoath at Showbox Sodo in 2007, where my photos were not dark but still pretty crappy. Here’s one that I thought turned out okay.

Absolutely! I started my music blog Rain City Ambience as an outlet to promote underground bands that I liked, but as the site grew I took on more work that I didn’t care about as much but made the site look better. As with everything in life, there should always be a balance between doing what you love and doing things you don’t like very much that you know will benefit you in the long run. I have a general appreciation for music, so at this point I am happy to photograph anyone who puts on a great live show.

Hmm… All over the place? I’ve had people refer to my live work as “artsy,” but I mostly just focus on continually switching things up and stepping out of my comfort zone in order to become a better artist. I do love a great wide angle shot though. They’re tough to nail perfectly, but they’re the most visually stimulating when done correctly.

That’s a tough question! I don’t really have an all time favorite, but there are moments when I’m shooting when I can just tell that I got the shot. This one of West from the AP Tour is even better than I originally thought—he’s mid-spin and even has his middle finger up.

This is very true! I consciously try to separate myself from the group when I’m in a photo pit full of people and everyone is shooting the same person, but other than that I think consistency (and not paying too much attention to everyone else) has always been key to my growth. I believe in being a photographer with a personality, but at the end of the day I want my work to speak for itself. On the other side of that, I would love to use my voice to help more people, so thanks for giving me a platform to do that. 🙂

What is the best advice you could give to young aspiring photographers?
Don’t spend more money than you can afford on camera gear, and shoot every day that you can—even with your phone. Take pictures of anything that interests you. If you aren’t shooting all the time, you’re not developing your eye and honing your style. It took me YEARS to get to a point where I decided that art is not an inherent talent and requires a lot of hard work before you start seeing results, but once you get to that point it feels pretty special.

Catch the second half of our interview with Kelly where she talks about her time on the road with Neck Deep this past spring in our upcoming digital issue, out later this month!