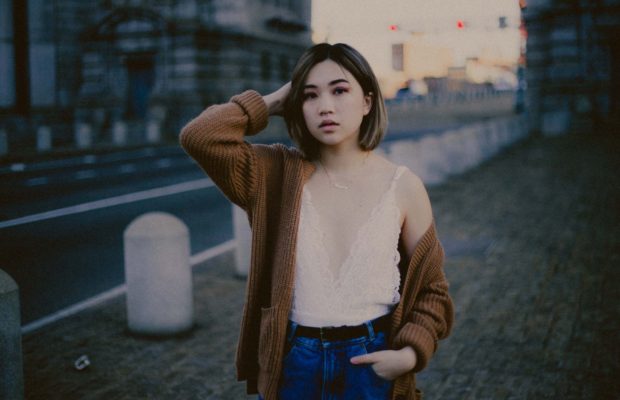 New York-based photographer Ashley Yu has had a passion for photography for as long as she can remember. Over the past few years, she has photographed a number of acts including Drowners, BØRNS, The Maine, Luca Lush, and more. From her stunning portraits to energy-packed live photos, Ashley opened up about where her career began, why camera gear isn’t everything, and how the impact of social media has shaped her career over the years.

I’ve been interested in photography for as long as I can remember. As a kid, I used to run around with a basic Canon PowerShot and I’d take photos of everyone and everything around me. I think half of those shots ended up just being extreme close-ups so I could achieve the blurred background effect that I was so fascinated by. I got my first DSLR, a Nikon D80, in high school so I could shoot for the yearbook and that camera ended up sticking with me for the next four years.

The first show I ever photographed was Matt Corby at Rough Trade in Brooklyn, NY; I wish I had arrived earlier so I could get used to the layout of the venue since there wasn’t a photo pit and it was my first time there. I really didn’t know what I was doing and just went with the flow, shooting from wherever I could – being 5’2” really helped. Other than that, I don’t think I would have changed anything else just because it was such a great learning experience for me.

My favorite act that I’ve photographed so far definitely has to be Luca Lush when he had a set at The Studio at Webster Hall. That was my first time shooting a DJ set and it turned out to be an interesting challenge. Up until that set, I was only able to photograph from photo pits or crowds, but he gave me permission to shoot wherever I wanted, so I was bounced around and shot from the stage, behind the DJ booth, and from the crowd. I didn’t realize exactly how different photographing a DJ set was from photographing a band, but both Luca Lush and the crowd were so full of energy that it wasn’t a problem getting some great shots.

Honestly not a lot! I just switched from Nikon to Canon over the summer so I’ve been working with a Canon 6D body and a 50mm f/1.8 lens. I usually carry around a popped out glasses lens and a prism for special effects and because I’ve been getting more into instant photography, I also usually have my Polaroid OneStep 600 with me.

In addition to live photography, you also are an experienced portrait photographer. Is there a particular style of photography you prefer to shoot? If so, which and why?

While I do enjoy the creative liberty that portrait photography allows, I definitely prefer to shoot live shows just because I started off with shooting candids when I first got into photography. I’m also more drawn to live photography because you have the ability to capture the unique essence of a single moment.

There are just so many ways to take a “good” photo, it’s pretty much impossible to pinpoint a specific element that makes or breaks a photo. If I were asked this when I first started taking photos, I would’ve said something like “proper composition” or “good focus,” but I’ve come to learn that sometimes breaking all your conventional photo rules can turn out some fresh results.

Back in September, I did a shoot with my roommate’s band, The Poise, and we decided to shoot on top of a parking structure in Baltimore. Because of schedule conflicts, we couldn’t shoot until after sunset so it was an interesting challenge to work around the lighting situation. We thought it’d be a fun idea to try to squeeze all five boys in the backseat on a small car. I had to set my camera all the way against the windshield on the dashboard, making it a struggle to adjust the settings and focus, but I was able to trigger the camera remotely with my phone and it resulted in an adorable group shot.

As an artist who is pretty active on her social media accounts, do you feel as though social media platforms have helped your career in any way? If so, how?

We are definitely at a point where being on social media is inevitable and, possibly, even essential to building your career. Clients constantly need new content and it’s becoming increasingly easier to connect with creators who fit with your aesthetic via social media. Instagram and Twitter have definitely helped me with getting my name out there this past year. However, I feel the most valuable takeaway from being more photography-focused on social media is that I’ve been able to connect with so many other photographers I admire.

As 2017 continues on, are there any bands you are hoping to photograph this year that you haven’t photographed before?

This year, I want to expand my ability to shoot across different genres. Like I mentioned before, you can point out the differences in shows across genres and shooting across genres demands creative flexibility. A few acts on my list I’d want to shoot includes The 1975, LANY, Migos, and Jai Wolf.

The two concepts I absolutely live by as a photographer is practice makes perfect and your equipment isn’t as important as your ability to create something unique. The more you shoot, the more comfortable you are with your tools and you eventually learn your personal style of photography. You also don’t need the priciest equipment to create top-quality content; before I upgraded to the 6D, I was using a 10 year old Nikon D80 and it produced some of my favorite content. One last thing – don’t look down on editing, sometimes the difference between a mediocre photo and an amazing one is making some tweaks on it in post-production.

Portrait of Ashley by Doris McGarry