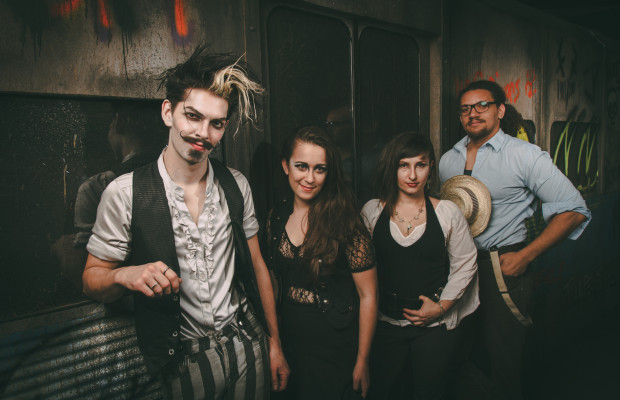 Fable Cry recently told us what their most memorable show was – check it out!

The month was October. The year was 2015. The night was Devil’s Night – the night directly preceding our most beloved Halloween. We were recently coming out of the studio after releasing our latest LP, hitting many cities on this tour that we had never been to together as a band. On this particular day, we were in one of all of our most favorite cities ever, the bombastic and tremendous, New Orleans. Now, New Orleans has a flavor all its own. The architecture is different. The people are different. The air is different. It’s dirty and salty and beautiful and inspiring. Most cities we tour, we are in and out just long enough to play the show and head to the next, but there are a few cities, however, that we leave extra time for if for no other reason than to spend more time soaking up its magic. New Orleans easily makes this short list.

Well into our second day here, we make our way to Cafe Istanbul. We enter, and begin to meet the other acts of the night. But this is not like just any other night of three or four rock bands, soundcheck, doors, rock. Tonight, there is a special treat. Tonight we are to be the house band for the outrageous variety/freak show known as Freaksheaux to Geaux! Now, being a house band for a show often means being the music before, during, and after the show. Being a house band for a show that is located in a different state than your own and with limited rehearsal time means that there is a lot left up to chance and much is sacrificed to the gods of “winging it”. So, we arrive to the venue, soundcheck, and meet a dozen friends and new friends that we will be sharing the stage with this night. Before we know it, doors open, and all of us are scrambling backstage, throwing on our costumes and slapping on the finer details of our makeup, putting extra care to please the audience of geisers who are all patiently in their seats waiting to burst! Then, without warning, it’s time. We break the stage, and a floor of cabaret-style tables lay before us, a balcony above that, with people of all kinds there staring back at us. Fable Cry grabs our instruments, our mics, and audience by the hair in a frantic effort to impress – they go wild! We play 30 minutes from our catalog, breaking it up with silly jokes and banter with an intimate yet energetic crowd. Then, after a brief intermission, it was time for the main act.

We jump on stage once more, and begin introducing the acts. Each song has a different performer, or group of performers, who have all choreographed something special and unique to fit specific songs of ours. But they’ve only rehearsed it to our recordings. And we’ve never seen what they are performing until this very moment. It was an overwhelming feeling to see these extremely talented and skilled performers, who had spent long hours working on something that would fit with our music, and were now exploding on stage with us! We watched as Mistress Kali (Freaksheaux founder and manager) and Thugsy the Clown performed a playfully cheeky twist on “The Good Doctor” in which the bride (Kali) is created by the mad Doctor (Thugsy) and eventually strangles him in fiendish glee! Later, Stef Kemp embodied a dangerous witch as we played “Fancy Dancing” whose enticing enchantments seduced everyone. Then, Sadie Hawkins (from Atlanta) performed a piece of squid burlesque to “Yeti Vs. Poseidon” with an elaborate squid costume that eventually fell away to be nothing more than eyeball pasties, and a beaded merkin! Dante the Magician lent his trumpet to our cover of Squirrel Nut Zippers’ “Hell” with vocals by Thugsy. Too many wonderful performances to describe them all, but the night was rounded off when we played “The Train Song” and Mistress Kali and Katye Kilbourne danced with fire, spinning it, tossing it, and blowing it, with the crowd all losing their shit as we pumped out our final ounces of energy, all the while exchanging gleeful glances at one another, acknowledging that we had just taken a major part in one of the coolest shows ever!

Every show is memorable in one way or another. Every show finds a way into my heart. And this show, the Devil’s Night Carnival, found a particularly deep place that I will always remember.