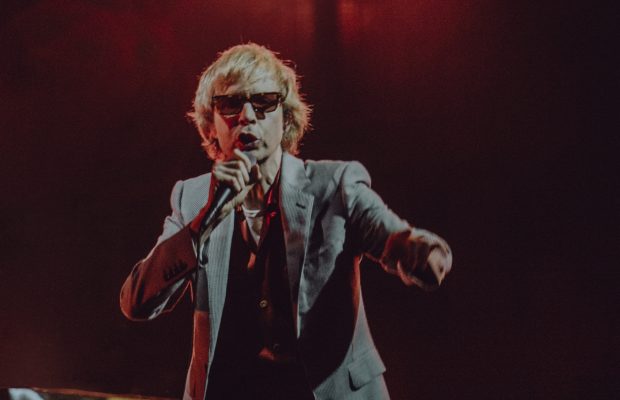 Beck with Cage the Elephant and Spoon

Forest Hills, New York is quite the neighborhood. Picture an authentic Austrian village in the mid 20th century, except it’s in New York City in 2019. That, my friends, is Forest Hills. Placed in the center of a quaint and quiet neighborhood in Queens, Forest Hills Stadium is an iconic former tennis and current live music venue. When I arrived at the venue for the Night Running Tour, I was pleasantly surprised to see how many fans had turned up early to bake in the heat before the night’s main event. A stacked lineup of indie rock powerhouses were set to perform on August 17th, Spoon and Cage the Elephant and Beck! It doesn’t get much better than that.

Starting off the days festivities was Spoon. The Austin, Texas natives are no stranger to the music industry, having been performing and touring around the world for the greater part of 2.5 decades. Their stage presence was extremely enjoyable as they played a slew of songs for every level of Spoon fan — concluding with their breakthrough hit “Do You?”

The sun had dipped just beneath the top bleacher section of the stadium when I entered the photo pit to await Cage The Elephant’s set. It had been quite a while since the last time I saw Cage The Elephant and over the years, I had heard plenty of praise over their stage presence and live performance talents. Fog started blasting across the stage as the band took their places with their respective instruments. “Broken Boy” off Cage The Elephant’s most recent record, Social Cues, was the first song of the set and lead vocalist, Matt Schultz, ran into the middle of the stage donning a flowing black outfit with many a mask and hat on his head.

Honestly, I wasn’t quite sure what was going on at first, but as both brothers Matt (vocals) and Brad (lead guitar) Schultz ran across the stage my excitement was growing higher. Due to a herniated disk in his back, Brad was unable to join in the crowd as he usually does during the beginning of the set, but he definitely made up for it as he screamed the lyrics to the songs with everything in him. Cage The Elephant played a lengthy and highly energetic set including “Cigarette Daydreams”, “Come A Little Closer”, “Tokyo Smoke” and their massive hit “Ain’t No Rest For The Wicked.” The bands set was coming to an end and Matt, who was wearing all 37 of his outfit changes on him throughout the set, had stripped down to his final outfit of the night — vintage red running shorts. Cage The Elephant concluded their set with “Teeth”, as Matt jumped from the stage into the crowd. First, he stood atop the crowd before falling on his stomach and having the crowd lift him to the back of the venue where he stood atop the soundbooth. With his fist in the air and the biggest smile on his face, Cage’s set had finally come to an end.

Despite quite the powerhouse performance, the night was far from over as rock legend Beck was about to grace the stage. The summer breeze was flowing throughout Forest Hills Stadium as a red light flashed across the stage and the first strings of an acoustic guitar began to flow through the speakers. Beck appeared, center stage atop a silver shining platform. The crowd erupted in cheers as they quickly realized he was opening with one of his most famous songs, “Loser”. It was a real treat to get to see the thousands of people inside the stadium that night come together in a collective sing along, “Soy un perdedor/
I’m a loser baby so why don’t you kill me?”

Beck played a lengthy set including songs both new and old like “Saw Lightning” as well as a six song encore. The encore was one for the books, featuring three different covers. First was a cover of Chic’s “Good Times”, as well as Elvis Costello’s “Pump It Up”. The real treat came when Beck covered Cage The Elephant’s “Night Running” and Matt Schultz came out to join him. For a brief moment, it felt like all of the bands on the bill and everyone inside the venue was one big family.

The Night Running Tour was one for the books, with one of the strongest lineups I’ve experienced in a while — honestly. And despite the end of summer quickly approaching, this concert was the perfect summer festivity and many great memories were made that night. Here’s to hoping these bands make a swift return to New York City soon!