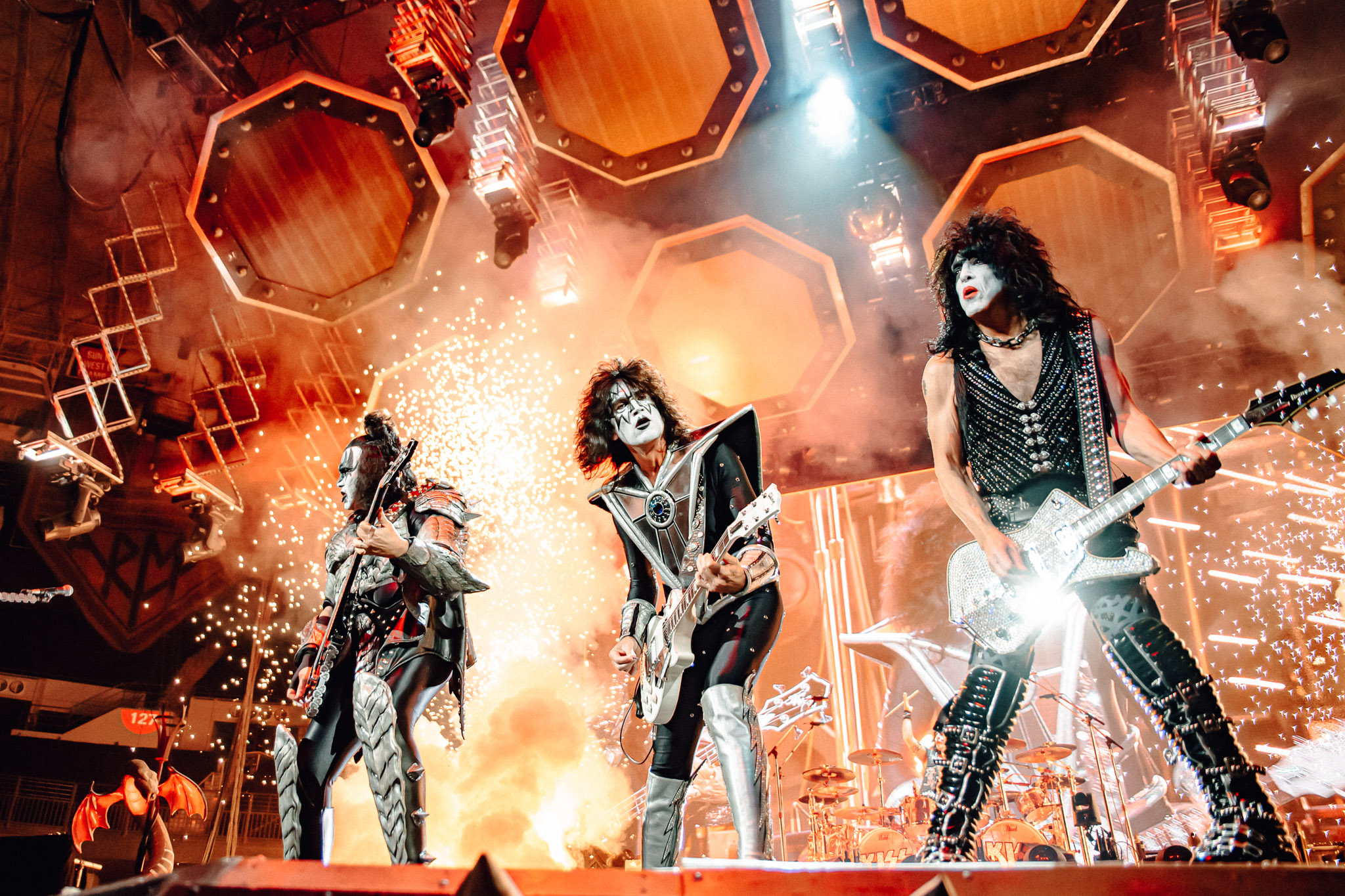 End of the Road World Tour

Legendary rock and roll band Kiss brought their End of the Road World Tour to Lafayette, LA this week after embarking on the farewell tribute run in January of 2019. The tour has since navigated delays due to the Covid-19 pandemic, but they are finally moving onward with more US stops this fall leading up to a Las Vegas residency this winter and “ending the road” overseas in 2022. It’s no secret that Kiss is arguably one of the most influential and iconic bands of all time, and after entertaining audiences for over 45 years, the self proclaimed “hottest band in the world” is pulling out all the stops on this final tour with all the glitz, glam, and excess you would expect.

Opening this historic tour is David Garibaldi, a refreshing choice for a supporting act as he is a live painter that creates stunning abstract portrait work on demand to the sounds of his subject’s music. Over the course of about 30 minutes, Garibaldi whipped up impressive masterpieces of Jimi Hendrix, Eddie Van Halen, and of course, the four iconic faces of Kiss. What’s even more impressive is that the painting of Kiss was created in front of the audience’s eyes upside down, which Garibaldi finished with a grand finale of flipping the canvas over and ripping off the bottom to reveal “LAFAYETTE.” The painting was to be signed by the band members after the show and auctioned off to benefit an organization called Crew Nation, which provides monetary grants to those facing hardship during the pandemic and beyond.

After captivating the audience with the mastery of Garibaldi’s live painting work, Kiss dropped the curtain and burst onto the scene with giant raised platforms and an appearance of floating in a fiery sky thanks to the dramatic use of fog, fireworks, and pyrotechnics that accompanied them. The band came in hot (literally, there was a ton of pyro) with their 1970’s hit “Detroit Rock City” as the crowd eagerly sang along. Even though Kiss retains only two of the original members, the quartet performed in full regalia and makeup and had nods to every era of the band’s anthology. Tommy Thayer shot fire out of his guitar to “Cold Gin,” Eric Singer schmoozed the crowd with charismatic drum solos and was raised into the air on a riser for “Black Diamond” and the band even performed later songs like the 1980’s favorite “Lick it Up” as well as the 1990’s hit “Psycho Circus.” Gene Simmons touted his famous tongue wagging gimmick and interacted coyly with the fans, while Paul Stanley provided hype for the crowd and heartfelt anecdotes between songs. The glam rock giants ended the show with a three song encore including Eric Singer on piano for “Beth,” an electrifying performance of “Do You Love Me” with branded balloons falling from the sky, and predictably concluding with “Rock and Roll All Nite” as confetti blasted from cannons and rained down amongst the crowd.

Something to be admired about the “Kiss Army” is that the fanbase truly knows no bounds. Everywhere you turned in the Cajundome there were families with multiple generations in matching t-shirts or full Kiss face paint. School age children marveled at the circus-like performance right alongside fans who seemed to have been around for the duration of the band’s legacy. Even now, 48 years later, the stage presence and showmanship of Kiss is a spectacle to be witnessed (especially when you have something as captivating as a 69 year old Paul Stanley flying through the air in platform boots while disco light floods the arena and fireworks explodes from the stage.)

Kiss has managed to stay relevant despite decades of changing rock trends and this tour is a time capsule of how many cohesive hits they’ve had over the years. The sound and production value is top tier and the musicianship and vocals are on par with what the band has always sounded like. There are not many bands that have reached this level of longevity and success: Kiss exudes an electric charm that spans generations, and this final tour is a bittersweet kiss goodbye to the end of an era.

Shout It Out Loud

I Love It Loud

I Was Made For Lovin’ You

Do You Love Me

Rock and Roll All Nite