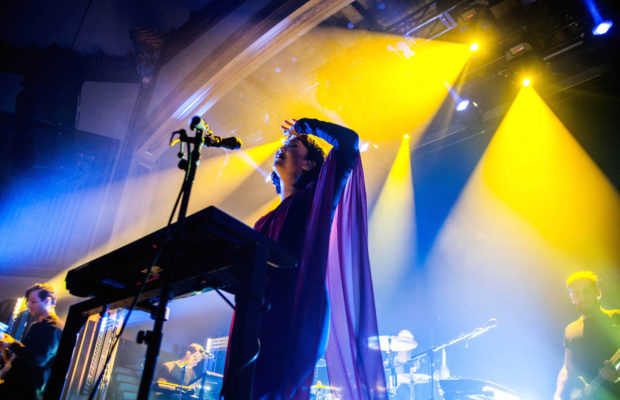 Seattleites bustled into the Neptune Theater Thursday, October 27th to not only escape the autumn rain that has plagued the city over the past few weeks, but also in excitement for the three bands that were set to perform in the historic venue.

Opening up the night was LA-based band The Chain Gang of 1974. Unleashing a set of groovy, pop-influenced tunes that got all of the early guests warmed up for the night, frontman Kamtin Mohager’s charisma and strong stage power made for a memorable performance. The band’s newest release, I Still Wonder, is available now, and among other songs, The Chain Gang of 1974 performed the title track from the release, an electric guitar-heavy track that showcased the band’s ability to write quality songs and entertain a crowd.

Up next was XYLO, an LA-based brother and sister duo, that managed to captivate the Seattle crowd with their sultry, pop driven lyrics and the vocal stylings of singer Paige Duddy. After gaining fans and popularity with their music on the internet in 2015, many fans in the crowd seemed to be familiar with XYLO’s music and gave them a warm reception from the moment they hit the stage until the end of their set.

Just two weeks prior to their Seattle show, The Naked and Famous released their new album, Simple Forms, giving fans little time to learn the new material. However, this didn’t stop the Seattle fans from unleashing an immense amount of energy throughout The Naked and Famous’s set. Opening up with “The Water Beneath You”, a track off of Simple Forms, frontwoman Alisa Xayalith’s powerhouse vocals captivated the crowd from beginning to end as the band performed hit songs like “Punching In A Dream”, “Losing Our Control”, and “Young Blood”. On all ends of the spectrum, The Naked and Famous stand as one of the strongest pop bands both instrumentally and lyrically, showing that in the world of pop music, they are able to perform their songs as well live as they sound on their recorded albums.

Closing out the night with an encore of “Last Forever” and “No Way”, The Naked and Famous put on an unforgettable performance on the second date of their fall tour, leaving fans wanting more and wondering when The Naked and Famous will be swinging through Seattle next.