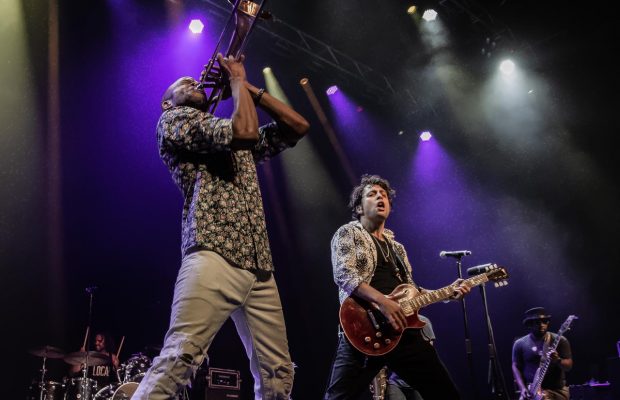 July 23rd was a night of celebration as Old Forrester’s Paristown Hall, Louisville’s newest music venue, had it’s opening night concert.  And what a night it was!  The sold out event drew music lovers from all over the city, with plenty of excitement and a buzz of energy present throughout the evening.  Balloons tied across the railings that lined the upstairs balcony gave off an aura of celebratory fun that extended to the bar, with venue patrons keeping the bartenders busy this evening!  Starting things off was popular Louisville folk/soul musician Ben Sollee, an amazing cellist, composer and storyteller whose success has gravitated beyond Kentucky’s borders.  Set to the sounds of Sollee’s music was the incredible contemporary dance troupe Pilobolus.  With a curtain set up across the stage, the dancers were behind the curtain, their shadows illuminated by various colored lights as they enacted different scenes from Louisville’s history.  Contorting their bodies to showcase Muhammed Ali, Hunter S. Thompson (“Gonzo”), The Kentucky Derby, The Belle Of Louisville and many other scenes, the audience was treated to quite a dance phenomenon!  Next up was the Chicago-based music ensemble Mucca Pazza, described as a gypsy-punk, New Orleans funk, mambo tango and rock and roll circus!  An ensemble that has almost more members then would fit on the stage, they played everything from saxophone, drums, guitar, trumpets, clarinets, trombones and much more, as well as a 2-woman cheer squad that performed absurd but hilarious cheers.  It was a great deal of fun to watch and it was clear that they were all having a great deal of fun on stage!

Headlining the show this evening was Troy Andrews, better known as Trombone Shorty, and his band Orleans Avenue.  Playing a combination of hard-edged funk, hip-hop beats and rock dynamics with plenty of improvisation, he and his band had the crowd dancing all night long!  The band was very engaged with the crowd throughout their entire set, with much of the band often standing at the edge of the stage, facing the crowd, and performing directly to the audience.  The band members interacted with each other often, as well, with the crowd and the band feeding off of each other’s energy!  They gave the crowd a taste of Mardi Gras and the rich musical sounds of New Orleans, combining the traditional spirit of the city with a modern twist.  It was truly a party on stage and the audience was happy to be along for the ride!  They were the perfect band to open the new Louisville venue, lending an upbeat, party atmosphere to an already jubilant occasion.