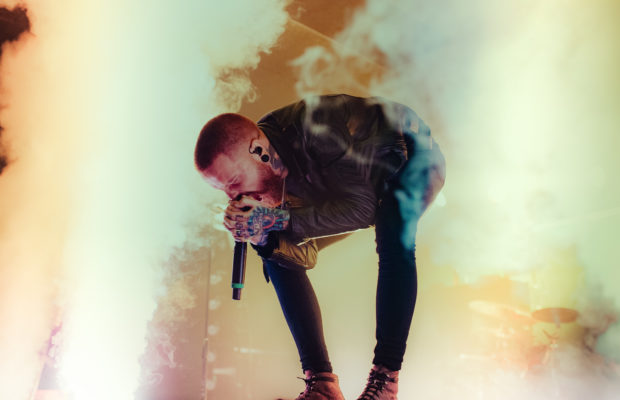 On Saturday, December 1st, Atreyu brought their In Our Wake tour through a cold and rainy Ft. Wayne, Indiana. The stacked tour package included bands such as Ice Nine Kills, Memphis May Fire, and Sleep Signals.

Opening up the evening was Sleep Signals, supporting their recently released EP At The End Of The World, the post hardcore/rock band gave a high energy first performance of the evening. Ice Nine Kills stormed the stage next, dressed in the horror themed attire they donned at Warped Tour, the band kept on the same energy as the opening band. Playing old favorites such as “Communion of the Cursed” and “Me, Myself, and Hyde” the band also played more of their recently released music such as “Stabbing in the Dark” and “The American Nightmare” which can be found on their newest album The Silver Scream.

Memphis May Fire played next, kicking the crowd energy up a notch with vocalist Matty Mullins’ voice soaring over the crowded room. The band started off with songs from their latest album Broken, and worked their way into older hits such as “The Sinner”, “No Ordinary Love”, and closed out with “Vices”.

When Atreyu they took the stage, the entire room erupted into beautiful chaos, the kind that comes with seeing your favorite band that you’ve loved for years. Their stage production and lighting was bright and colorful, and each member moved around stage as if they never heard the word “tired”. The band played a good mix of newer songs off of their newest release In Our Wake” as well as popular older favorites like “Ex’s and Oh’s” and “The Crimson”. Lead vocalist Alex Varkatzas bounced around on stage ever so gleefully while producing power house vocals that not only captured the entire room, but also an entire music scene (the band’s career spans about 20 years). They closed out their encore with Rick Astley and Bon Jovi covers before closing out the entire with “Lip Gloss and Black”.