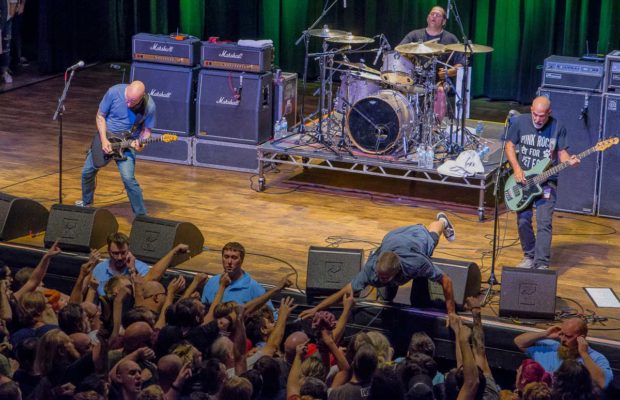 Descendents with The Get Up Kids and Braddock

Descendents performed recently with The Get Up Kids in St Louis to a sold out crowd of diehard fans.  They are one of those bands that have stayed relevant throughout the years, no matter the hiatuses or sporadic touring.  Being my all time favorite band, I always make sure to catch them on tour!  As the lights dimmed in the venue, signaling that the band was about to take the stage, the crowd started cheering and chanting “Milo, Milo, Milo”.  As Milo, Stephen, Bill and Karl took the stage, they immediately launched into their classic hit “Everything Sux”, to delight of the fans.  The energy from the crowd was explosive throughout the entire set, with fans singing, dancing, moshing and crowd surfing.  It is apparent that the band was having a lot of fun on stage and love their fans as much as their fans love them.  Having had such a long career, Descendents have an extensive catalog of songs and performed a nice mix of older and newer material.  Performing such classic hits as “Clean Sheets”, “Silly Girl”, “Hope”, “Myage” and “Get The Time” and newer songs such as “Shameless Halo”, “When I Get Old” and “Without Love”, they satisfied newer and older fans alike.  Towards the end of their set, Milo jumped from the stage, walking the length of the floor between the stage and the barricade to sing directly to the fans.  He even stepped up on the barricade steps and hugged and sang with a couple of the fans before getting back up onto the stage.  Ending their set with “Descendents”, the band left the stage to the cheers and applause of the crowd, who chanted “Encore” until the band came back out!  Treating the crowd to two encores, the band performed a few more songs, including “Smile”, “Sour Grapes”, “I’m The One” and “Bikeage”, ending the evening with their classic hit “Catalina”.  Descendents always put on an incredible and high-energy show, this night being no exception, and ensured that their fans had a great evening.  The Get Up Kids opened the show along with local St Louis band Braddock.