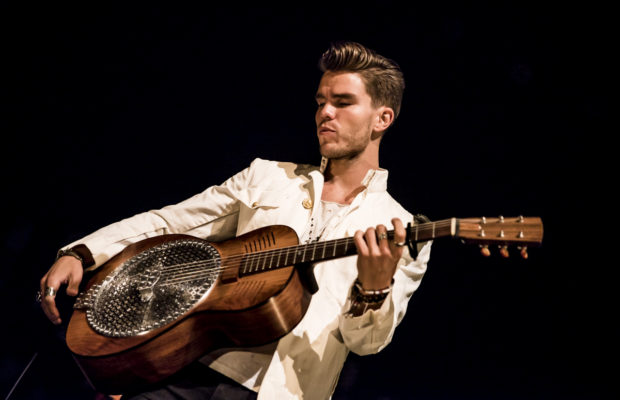 Playing the first of two shows at the Fonda Theatre, Kaleo is out now on their Handprint Tour with Bishop Briggs and The Wind + the Wave. The foursome originally from Iceland moved to Austin, Texas last year after signing with Atlantic Records and just released their first US full album A/B featuring the singles “Way Down We Go” and “All The Pretty Girls”. Influenced by folk and delta blues with some rock thrown in, Kaleo opened their sold-out, eclectic sounding set with the whistling tune “I Can’t Go On Without You”. An unusually slow song to start off a concert, but I think it fit with the Kaleo fans familiar with their unique style. Singer JJ Julius Son has a voice that effortlessly reaches all the melodic ranges and weaves itself through the audience.  Featured on the soundtrack for ‘Vinyl’, the night included the ‘I dare you not to move’, bluesey, rock song “No Good” that had the audience jumping. Then moved to the hauntingly, beautiful song “Vor í Vaglaskógi” sung in the native language of the band, which literally had couples slow dancing. If you can’t make one of their numerous shows across the U.S., you need to check out their amazing videos. “Way Down We Go” was filmed live at the bottom of Thrihnukagigur a dormant volcano and their newest video for “Save Yourself” was filmed on an iceberg at Fjallsárlón Glacier Lagoon.

I unfortunately missed The Wind + the Wave, but was very fortunate to catch the very talented Bishop Briggs. Moving from one side of the stage to the other, that girl Bishop with her throaty vocals and trap-indebted drum beat seared through the single “River” to the melodic “The Way I Do” to “Wild Horses”.

There is no doubt the Handprint Tour is jammed with talent. Take an evening and go enjoy the wide range of excellent sounds to give your musical soul the lift it needs.