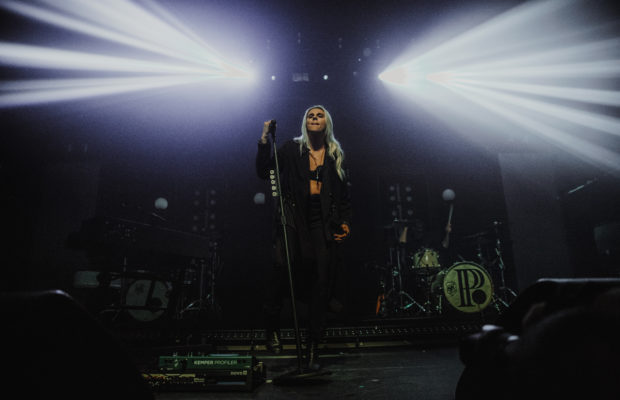 My job is to go to concerts, take pictures, and then write about my experience at the show. Due to the high volume of shows I attend for my job, there comes a point where all of the concerts begin to blend in my head. But, occasionally, I go to the one show that whips me out of whatever bad mood I’m in, distracts me from real world responsibilities and makes me happy. Essentially, it does what music is supposed to do, right? Tuesday’s show at Terminal 5 was by far one of those shows for me. PVRIS was bringing their sophomore record All We Know Of Heaven, All We Need Of Hell to the stage, bringing along Lights and Flint Eastwood. The female centric lineup for the night was really peaking my interest and it did not disappoint.

The Detroit trio, Flint Eastwood kicked off the show for the hundreds of fans who were eagerly awaiting the music to start. The heavy bass moved over the crowd as lead singer, Jax Anderson, entered in a giant red brimmed hat. Their set began with the hit “Queen”, with Anderson’s pigtails flipping and flopping in all different directions as she danced from side to side. The 30 minute set, though short in time, was full of energy and included a diverse range of songs including “What You’re Looking For”, “Glitches”, before closing with “Rewind”. It was sad to see Flint Eastwood go, but fans were getting one step closer to the main event.

Not before long, Canadian pop singer Lights graced the stage. I’ve been following Lights since I was in middle school and now, about to graduate college, I feel like I was coming full circle. Watching her performance through the viewfinder of camera, I felt like a proud mom watching one of my first musical loves totally set Terminal 5 on fire. Lights played a lengthy set that included songs from her last three albums, including her most recent release Skin & Earth. Lights took a little break mid-set to detail the crowd on the comic book series that she created to go hand in hand with the new album, before plunging into the second half of her set which included hits like “Savage”, “Giants” and “Up We Go”. Lights said goodbye to the crowd by ripping off the Skin & Earth t-shirt she was wearing and throwing it into the crowd. Cheers erupted as her red pigtails bobbed towards the back of the stage and the lights came up.

It was finally the moment everyone had been waiting for. Fans were lining the streets of Hells Kitchen for hours before the doors opened and now, they were finally within reach of seeing their favorite band. It’s no hidden fact that PVRIS is a band that hasn’t toured America quite as much as it has toured other locals so fans were especially amped up and ready to go. A giant black curtain was whisked off the stage and a riser with two drum kits on it stood outwards facing the crowd, behind it were three light panels with gothic lamp posts between each of them. This was a stage set up that was distinctly PVRIS. The lights went dim and the entire venue erupted into the loudest cheering I’ve heard at a non-sporting event in a long time. “Heaven” would be the first song the band played, as Alex and Brian threw their guitar and bass on respectively while lead singer Lynn Gunn took a seat behind her keyboard. Watching from the photo pit, where I stood approximately 5 feet from Lynn, I could see the heart break and emotion that was emanating from her as she sang the lyrics.

The level of emotion and intensity coming from the band didn’t die down the entire night and the crowd was feeding off of it. Every time Lynn shouted into the microphone, “Jump! Jump!” during the chorus of St. Patrick, I could feel the floor shaking. The stunning visuals of PVRIS’ set should also not go unnoticed. The close up video of a spinning ballerina left a haunting visual in my mind as the final chords to “Anyone Else” faded away. Donned in a floor length black coat, Gunn’s platinum blonde hair provided a sharp contrast as she floated from stage right to stage left, nailing every note in the setlist. Time was flying by, before even I knew it, PVRIS had been on stage for over an hour and the night was starting to wind down. The band took their 15 song setlist and spliced it evenly with songs both new and old to appeal to fans of all ages and obsessions within the crowd. “Half”, “Smoke”, “My House” and “Winter” were among some of the crowd favorites before everything in the venue fell dark except for the gothic lamp posts on stage. With the flicker of one bulb, the band came back on stage for their encore of “No Mercy”. It was during this performance of their final song that the true love and emotion that the band has for their fans came through as guitarist Alex mouthed the chorus along with Gunn, wearing a huge smile on his face. In a moment of pure instinct, Gunn jumped down from the stage and climbed the front row barrier to join those fans in the front during the final lines of the song. Her voice cracking as she literally screamed her lungs out into the microphone, cheers were abundant within the venue.

Even sitting here, three days later, I get chills thinking about that show. There have been few shows in my life that have left such a lasting impact on me. The love and passion that PVRIS has for their music, their fans and everyone and everything in between truly shines through on the stage when they’re performing. There’s absolutely nowhere else they would rather be and certainly nowhere else their fans would rather be spending their evenings than pouring their hearts out with their favorite band. I know that I felt that way on Tuesday night.