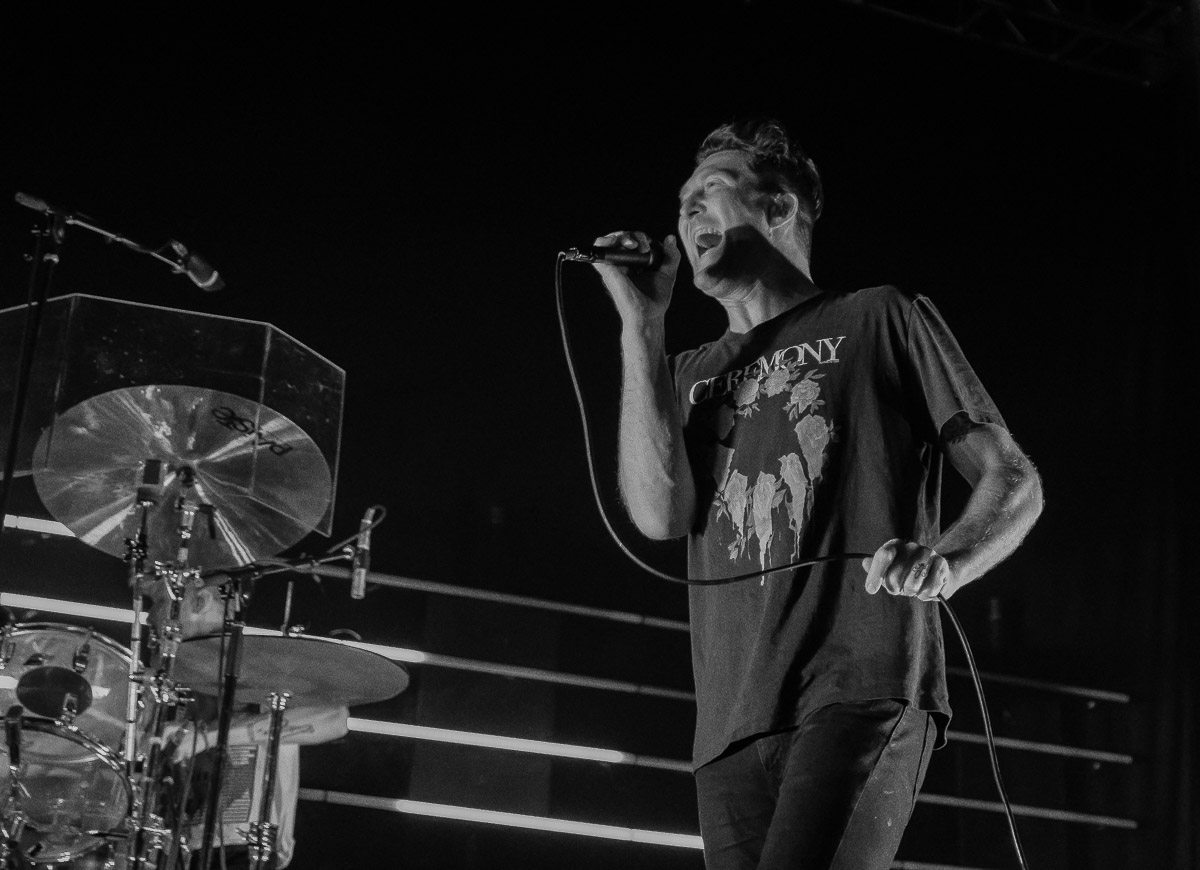 Anberlin with The Early November

For many bands right now, they are touring for the first time in around 2 years and are feeling happy and grateful to be back on the road!  For Anberlin and The Early November, their energy on stage this evening was incredible.  Starting out this evening was New Jersey emo/pop punk band The Early November.  Singer/guitarist Arthur “Ace” Enders started out the set by coming out on stage solo, just him and his electric guitar.  Soon after, though, the rest of the band joined him on stage for a fun and high energy set!  The kind of set where as a photographer, I wasn’t sure where to focus, in the best possible way, because there was so much movement and energy happening on stage at once!  Asking how many people had ever heard of The Early November, several people in the crowd started cheering!  Telling the crowd that they liked Louisville but didn’t make it here too often, Enders then dedicated the next song to those who had heard of the band before, launching into “Decoration” from their 2006 album The Mother, the Mechanic, and the Path.  He later talked about how interesting the tour had been, as right before the tour started, several of the members dropped off.  Three of the guys on stage were filling in and had never played with the band before.  They sounded great, though, and it was apparent they were all having a great time playing together and were in high spirits! Enders was having fun with the crowd, sharing a fun and light banter, and when someone from the crowd shouted “I love you!”, he joked that the band had paid that guy to say that.  He went on to say that The Early November had been a band for 20+ years and have seen plenty of ups and down, as have a lot of bands, and how they had all come from the same place-a collective of people who were building a scene.  He went on to say how, at the age of 18, he had learned how to play guitar and write songs with people who were forming the emo punk scene and how they had all collectively created something that has endured and is bigger than he and his band.  He then said how the band had traveled the world and wanted to positively impact people and had never gone into this to make money, thanking everyone for their support over the years.  He said he was grateful that he got to share this experience with his kids and that the greatest gift you can give people is impacting their lives in a positive way.  After playing a few more songs, the band left the stage before coming back out for an encore.  The bassist addressed the crowd saying “Tuesday night live music!  That’s something we didn’t get to do last year!  Feels good doesn’t it?  Let’s get weird with the last 2 songs, yeah?”.  Thanking the crowd sincerely for their support, they finished out their set with just as much energy as they started it with, leaving the crowd good and warmed up for Anberlin.

As the lights dimmed to signal that Anberlin was about to hit the stage, the crowd started clapping and cheering, a wonderful anticipation filling the air for the evening ahead.  As the members of Anberlin came out onto the stage, waving to their fans, they started things out with “We Are Destroyer”, “The Resistance”, “Paper Thin Hymn”, and “Impossible”.  Thanking the crowd for dancing and singing along, singer Stephen Christian asked “Is everyone having a great time?  Scream it out with us!”.  It is apparent that Anberlin, who have had a career that has spanned off and on for close to 20 years, love and are grateful for their fans.  At one point early on in the set, Christian saw a fan up front at the barricade filming them and grabbed her phone and filmed some footage of them singing and playing on stage before handing her phone back to her.  Throughout the evening, the guys were joking around with each other and engaging with fun, and sometimes hilarious, banter with the crowd.  “You have no idea how amazing it is to be standing in front of people,” said Christian.  “We had this tour set to happen last July and then it was canceled, and then again for this past July, and it was cancelled again.  We thought there was no way we’d be here now, but here we are!”.  He went onto say how in early August he wasn’t sure they would make this tour because he and a few members of his family got so sick and that he was in bed sick for 13 days.  He then said “I realized a few things during that time.  First, no one in this world can promise you tomorrow.  As long as you have breath in your lungs, go and do what you want and what fills you with passion, whether that’s going to art school or med school or whatever. Second, I realized that I need community, friends, and family so much.  These guys on stage with me are my family.  They checked on me when I was sick and brought me food.  You could get everything you dream of, but if the end of that dream you are alone, then what’s the point?  Somehow and someway we are all connected and are all in this together.  Follow your dreams and see the potential in yourself!  You are incredible.  Wherever you are in this world, go out and make a difference.  We are all connected.  As long as we’ve been a band, we’ve tried to make a difference and we hope to inspire you to do the same.  We brought an organization on tour with us (Childfund International) that help kids get better education, food, clothes, and just a better future.  They help a child to be a better version of themselves.  If you want to go back and sponsor a child this evening, I want to come out and thank you personally.  But if you don’t make a difference tonight, make sure that you go out there and make a difference somewhere!”.  He then said that they were going to play a new song this evening, performing their new single “Two Graves”!  Ending their set with “Godspeed” from their 2007 album Cities, the band left the stage before coming back out for one more song.  Thanking the crowd for coming out this evening and for all of their support over the years, Christian wished everyone a beautiful night and told the crowd they would see everyone again as soon as possible, ending the set with the track “Feel Good Drag” from their 2008 album New Surrender.  It was a fun night of great music and great energy!