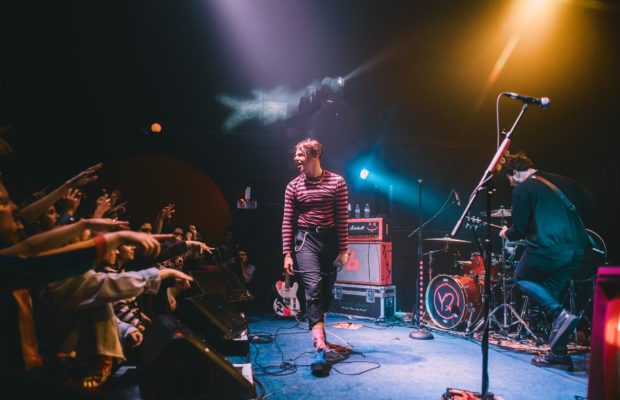 Opening up the evening were LA-based trio, Arrested Youth, who have been gaining a lot of traction year or so, being featured multiple official Spotify playlists. The vocal and writing style of lead, Ian Johnson, is very reminiscent of Twenty One Pilots, but is still quite unique. It’s easy to see why people like them. And although it’s lacking in some spatial awareness, their presence on stage was full of energy and definitely got the room pumped and ready for the rest of the night.

As expected if you’ve ever seen any sort of photos or footage of Yungblud show, he came out bouncing. This man’s energy did not falter throughout the entire set, as he jumped and leapt around and threw himself on the ground. His lyrics are extremely honest, discussing mental health, society, and just generally very relatable emotions for teenagers and young adults.

Seeing Yungblud was a refreshing experience for a couple of different reasons. The first being just how real and relevant his lyrics are (as previously mentioned), with songs like Polygraph Eyes talking about men taking advantage of drunk girls, encouraging them to leave the girls alone. The second reason is because as hard as he tried, he couldn’t convince the venue to make the show all ages, leaving a lot of his fans stuck outside. But being the sweetheart he is, he promised them earlier in the day that he would go out and see them. And he did. Twice. Once before the show, and then again after the show with his guitar and portable amp to play a sidewalk show to everyone waiting outside as a thank you. It’s not everyday you see an artist as real and honest about everything, really.

If you ever have the chance to see Yungblud, it is definitely not something you should pass up.