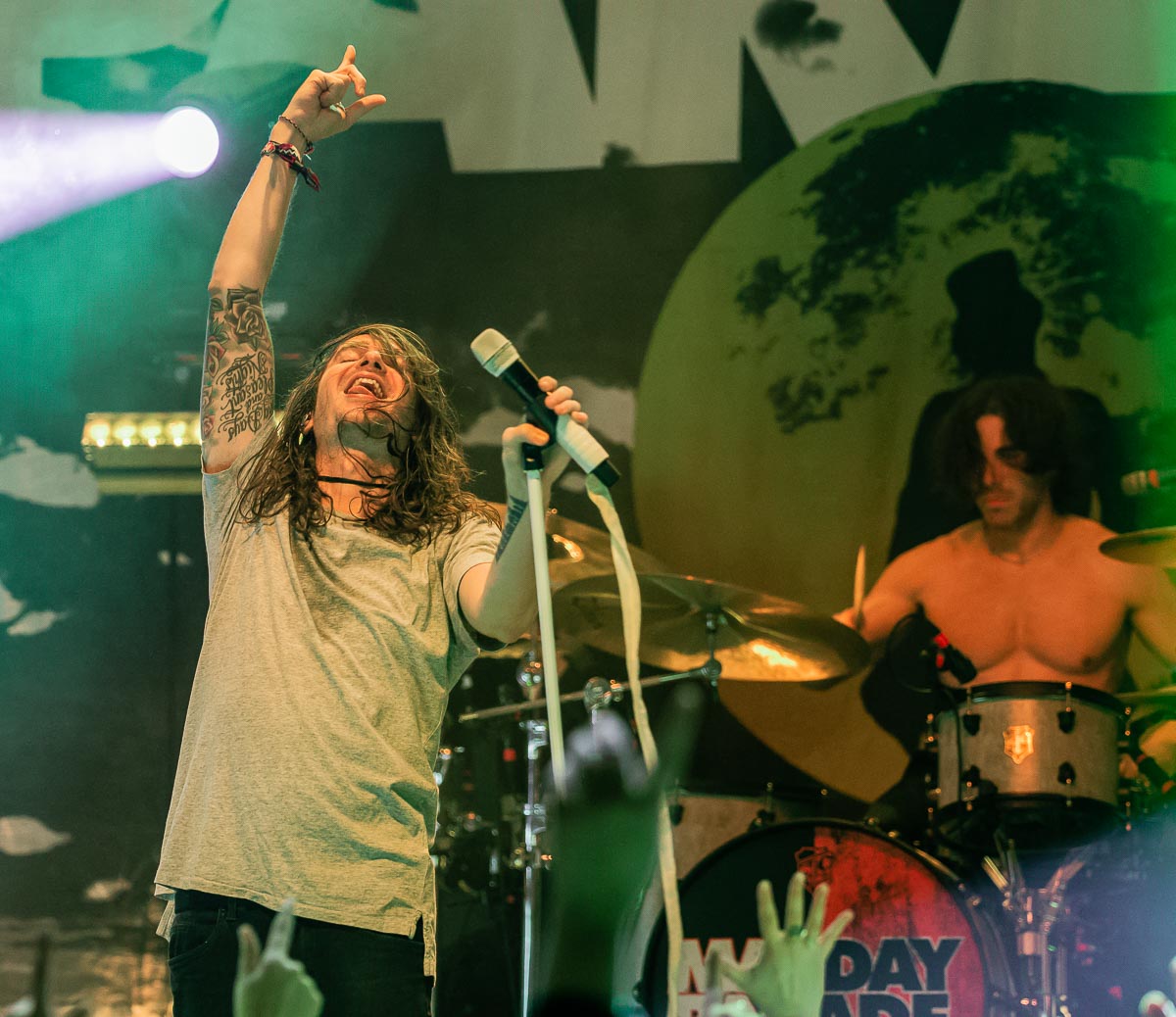 Mercury Ballroom was packed on Wednesday night with what looked to be a nearly sold out crowd, everyone filled with anticipation of seeing Mayday Parade perform.  These guys always draw large crowds and it’s easy to see why once they hit the stage.  They give their heart and soul to each performance and are pure energy on stage!  I arrived at the venue about 30 minutes before the show was set to start and there were still fans filtering in.  As I walked in, the floor area and balcony were packed with fans ready for a fun night ahead.  Opening the show this evening was Atlanta rock band Microwave, with many people in the crowd cheering as they took the stage.  Having released several albums and EPs, they played a nice selection of songs from their catalog.  With lots of energy on stage, the band was having a great time performing and interacting with the crowd, with singer/guitarist Nathan Hardy all smiles for most of the set.  They definitely got the crowd warmed up for Mayday Parade!

As Mayday Parade took the stage, the crowd erupted in cheers and clapping.  Having formed the band in 2005, they have garnered a passionate and loyal fanbase over the years.  Frontman Derek Sanders is always full of energy, bouncing around the stage, and really engages the crowd with each performance he gives, this evening being no exception.  The stage set up this evening had two small platforms at the front each side of the stage, allowing Sanders, guitarist Alex Garcia, rhythm guitarist Brooks Betts, and bassist Jeremy Lenzo to take turns standing on them and performing to the crowd.  Starting things off with “First Train” from their 2020 3-song EP Out Of Here, the band then took it way back to their 2007 album A Lesson In Romantics with “Jersey”, with the crowd going wild as they screamed every lyric along with Sanders.  Although much of the set was high energy, Sanders did take the energy down a bit midway through the set, bringing his keyboard out for an acoustic rendition of “Piece of Your Heart”.  Rounding out the set with “If You Wanted A Song Written About You, All You Had To Do Was Ask”, “Kids of Summer”, and “Anywhere But Here”, Sanders then took a moment to address the crowd, telling them that normally the band would leave the stage and come back out for an encore but if it was alright with everyone, they would just skip that step and go right into the final two songs!  The band then performed “Jamie All Over”.  Telling the crowd to be good to each other and kind to each other and to look out for each other, the set ended with “Oh Well, Oh Well”.  Mayday Parade always put on a fun and high energy set and they left their fans this evening buzzing long after the music stopped!