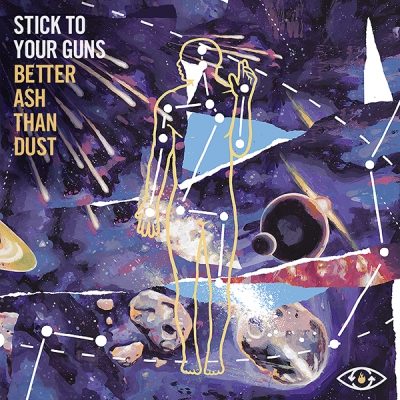 In Stick To Your Guns’ older releases, the band focused strongly on harsh shouting from vocalist Jesse Barnett, which contrasts their more recent style that has a lot more singing from Barnett. Better Ash Than Dust seems to find a happy medium of the two, Barnett doing his signature shouting throughout the EP, but still managing to sing on a few of the tracks. Either way Barnett’s style goes, his lyrics always ring loud and true.

Stick To Your Guns has never been silent about social and political issues, and on Better Ash Than Dust, that is more than consistent. “Universal Language,” the first single off of the EP, released earlier than slated because the band felt compelled by the excess of violence going on in the world throughout the early summer. That being said, “Universal Language” sheds light on the excessive violence being faced in the world today. Throughout the rest of the EP, the band continues to touch on the choices listeners have to stand up against things they see wrong with the world.

The title track of the EP features a voiceover from singer Nina Simone discussing the idea that it’s crucial for musicians and youth to be involved and speak out about politics. This mimics the voiceover of philosopher Jiddu Krishnamurti featured on their 2012 release, “Diamond.” The song structure also holds strong similarities to that of the song “Erida” from The Hope Division. Whether this was intentional or not, it will most definitely be a favorite among older fans. Their ability to combine touchy topics and incredible instrumentations is what is going to keep Stick To Your Guns thriving among hardcore as a genre.

“The NeverEnding Story” heavily focuses on use of traditional rock melodies between vocals that will keep listeners bobbing their heads the entire song. Crashing drums by George Schmitz layer the framework of the track – of the whole album, in fact. “The NeverEnding Story,” extremely fast-paced and entertaining, leads gloriously into “The Suspend,” which relies strongly on a slow build-up of rhythm, melody, and clean vocals by Barnett. There is a point in the song where all instrumentation becomes extremely hollow and subtle, and listeners are left with Barnett’s smooth clean vocals resonating in the ears. Then, slowly, one instrument is reincorporated at a time until Barnett continues roughly screaming the lyrics. Then finally, everything is silenced except a few ominous, spacey notes.