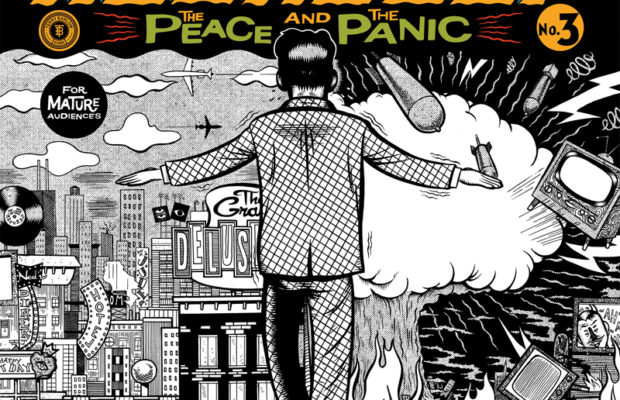 Wrexham, UK based band Neck Deep are no strangers to the pop-punk industry. In fact, over the last couple of years since their previous release the band has climbed their way to fame, recently completing a headline world tour that took them through 15 countries and sold over 52,000 tickets. Now, back from tour, Neck Deep has dedicated their time to providing listeners with the best album they possibly can and they have surely delivered with their newest release The Peace and The Panic.

What is funny – or rather, more coincidental — about Neck Deep is that they always manage to drop fans with an album that is particularly relevant to their lives at that point in time. Their previous release left listeners with an optimistic view on life for those moments when you might be feeling a little down, whereas The Peace and The Panic offers listeners with a highly educated and more mature, yet totally jam packed album about the realities we are facing in today’s world. Neck Deep has managed to confront the fear and disarray that we hear too much about in today’s world in a way that still features their extreme musical talent and pop-punk staple.

With maturity comes and evolution of sound — but not to fear, it’s not too different. This change is a good change, and it is no more evident than on the latest single from the album, “In Bloom”. The song takes a turn for the pop side of pop-punk, but still remains within the bands sound. No one stays the same forever and for Neck Deep, the graceful step in maturity for both themselves and their sound has greatly helped them. On tracks like “Happy Judgement Day”, “The Grand Delusion” and “Heavy Lies”, we see Neck Deep return to the sound that fans are most familiar with. But the real treat in this album is the variation in sound as the bands inspiration comes through on certain songs. The late 90’s/early 00’s pop-punk sound serves as the basis for “Critical Mistake”, while the band takes a backseat as Barlow’s vocals prevail for slower songs like “19 Seventy Sumthin’” and “Wish You Were Here”. The historical hints to the Cold War era are subtle yet placed perfectly throughout the album. This is seen through the album artwork and lyricism in “Don’t Wait”, which features Architects Sam Carter. As one of the heavier tracks on the album, it begins with heavy guitar and drums before Barlow enters singing “This world they keep dividing/ The government is lying/ I’m not gonna be a fallacy of this society.” Perhaps a powerful nod to the climate that we found ourselves in at this very moment.

For many bands who have established a level of fame such as Neck Deep, it is easy enough to give up and stop trying. However, that is so far from the case for Neck Deep that it was never even in the picture. The passion and love this band has for their music and their fans shines through album after album but particularly on The Peace and The Panic. As predictable as it may be to say that with each album the band continues to grow, it is true and The Peace and The Panic is hands down the strongest album, in every aspect, that Neck Deep has delivered thus far.