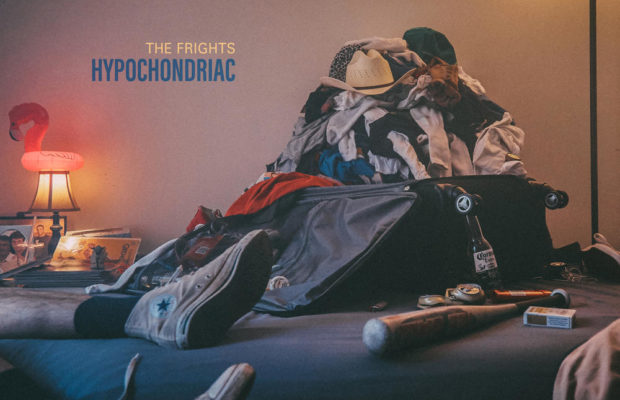 San Diego’s The Frights newest album Hypochondriac drops on Friday! This is their third full length album and the first since their signing to Epitaph earlier this year. The Frights are known for being experimental and this album really shows their capable of pushing their creative limits. Their sound is upbeat, surfer punk with ironic and comedic lyrics, think Weezer meets Blue October. Formed in 2012, the band has released three EP’s and two albums, a self-titled in 2013 and You Are Going to Hate This in 2016.

For Hypochondriac the band spent two weeks straight of 12 hour long recording sessions at Balboa Recording in Los Angeles where they drank produced by FIDLAR frontman Zac Carper, mixed by Rob Kinelsi and mastered by Grammy Award Winner Grag Calbi (Arcade Fire, Tame Impala, The War on Drugs). The album shows a lot of growth and maturity with a cleaner sound and more personal lyrics from vocalist/guitarist Mikey Carnevale. He says “In the past, I think I’ve hidden behind distortion and reverb […]”, but he’s clearly let his vocal ability shine, especially in tracks like “Crutch”, “Over It”, “Goodbyes” and “Hold Me Down”. Carnevale changed his writing process from working on an electric guitars to solely writing on an acoustic for Hypochondriac, and forcing himself to write lyrics in one sitting instead of sporadically as with previous albums. While the album differs in sound, you’ll still find a nice mix of acoustic, mellow tracks and dirty, grungy guitar riffs and breakdowns.

The result is a beautifully written and honest album from start to finish that will get you through some of the best and worst times of your life. Carnevale couragously handles topics like depression and anxiety with a comedic flare in songs like “Tell Me Why I’m Okay” – “There’s a piece breaking inside everyday, it can’t wait, it can’t wait to get out. If the storm ahead is looking for someone to take, I can’t wait, I can’t wait to get out.”, “Crutch” and “Broken Brain” or failed relationships caused by these mental issues like in “Over it”, “Goodbyes”, “Alone” and “Whatever” with lyrics like “I’m still messed up  from when you said you didn’t love me, 30 minutes before we played, I sang songs about your name” and “So fucking sick of you acting like a dick, just trying to pull my life back together”.

This album is sure to grab some attention, these guys will be making waves. They have released three singles off the album already you can find on Youtube the videos for; “Over it”, “No Place Like (Not Being) Home” and “Me and We and I” and be sure to check out the full album for my favourite tracks “Whatever”, “Pills” and “Hold Me Down”.