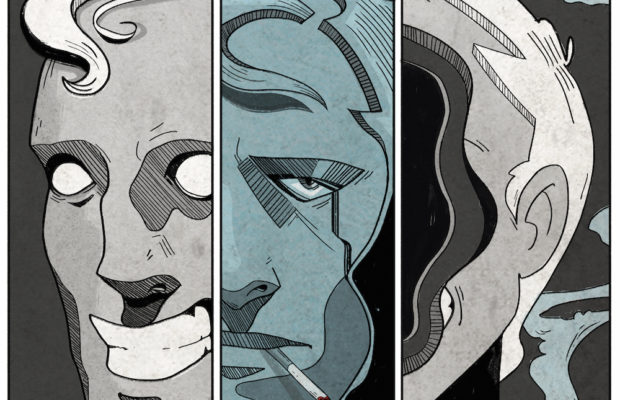 Kentucky hardcore outfit Knocked Loose are breaking boundaries on their debut full-length, Laugh Tracks. Laugh Tracks comes as a lively follow-up to the band’s 2015 split EP with Damaged Goods, and their most popular piece of work, 2014’s Pop Culture.

On Laugh Tracks, the band shows an excessive amount of structural and lyrical growth. In a genre and era where many bands feel that they must conform to a certain sound and specific standards, Knocked Loose throws limitations out the window. Knocked Loose seems to have polished and refined their ferocious sound without trapping themselves in a box. Their music fits in among fellow hardcore bands such as Expire and Trapped Under Ice, but still stands out among the rest.

Influenced by an eclectic range of genres – from metalcore to some early thrash – Knocked Loose are not afraid to be themselves. With crashing cymbals, low and heavy riffs, and punch-packing vocals, they have created a finish product that keeps fans on the edge of their seats.

On tracks like the opener, “Oblivions Peak,” the band performs as though they are a force of nature. An ominous and eerie introductions to the album, the song flows beautifully into the first single, “Deadringer.” With dark and ominous lyrics, the song is a great exemplification of what Knocked Loose is. “My tombstone was made at birth / My coffin is on my back / Wrapped in chains I carry burden / Dressed in tarnished rags / Wrapped in chains,” is only one stanza of a song that shows the lyrical growth this band is capable of. Released in early July as the band’s first single after signing to Pure Noise Records, the song was a perfect way to introduce fans to the new album.

Laugh Tracks flows fantastically from beginning to end, and will grasp the attention of fans and critics alike. Knocked Loose will only continue to grow from here on out, and future releases are bound to be a hit.