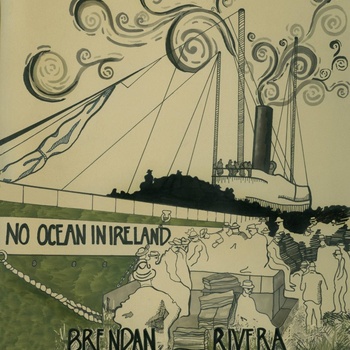 Brendan Rivera is a singer and songwriter from the Brooklyn area. His latest release No Ocean In Ireland is set to release tomorrow on iTunes, Amazon, and also available for a vinyl format.

No Ocean In Ireland is a fantastically composed and put together album which features eleven songs from Rivera. All the songs on the album combined together brings a very nice feel and tone to the album. Although “Introduction” starts off as a rather serene and quiet instrumental piece, the album does change throughout and bring a rougher tone in title track “No Ocean In Ireland.” The song “Hole In The Curtain” is very notable as well, a heavier feel to it both lyrically and musically.

Perhaps one of the biggest misconceptions people may have about Brendan Rivera is that he has a soft acoustic tone – perhaps due to the pictures of him and an acoustic guitar and gentle feel to it. However he also produces a very powerful and dynamic sound which is what makes him so unique.

The album No Ocean In Ireland is more than impressive and has something for everyone. It is filled with eleven catchy tracks which will all have you hooked. Be sure to pick the album up once it’s out and keep an eye out for Brendan Rivera, he is sure to make it big soon!