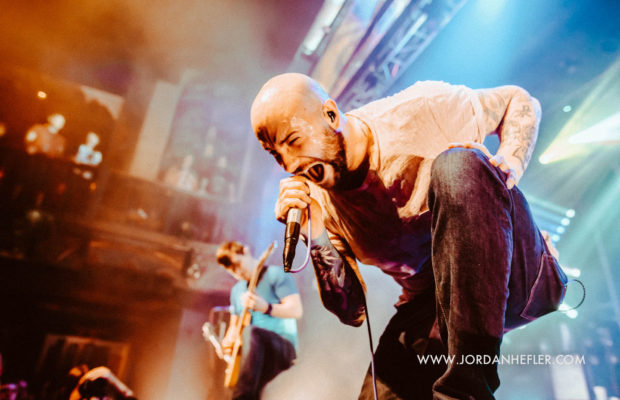 Photographs and Words by Jordan Hefler

It seems that there are ten year tours popping up all over the place now. The August Burns Red Messengers tour was surrounded with intense anticipation, bringing all ages out to the New Orleans show at the House of Blues on February 2nd.

The show started off with ‘68, which packed a heavy punch with their sound despite being a duo with just drums and one guitar. Vocalist Josh Scogin (of The Chariot and Norma Jean fame) delivered a forcible performance, complete with tossing his guitar up in the air and thrashing around on stage to drummer Michael McClellan’s driving beats. Scogin even sported purple beads that swung from his mic stand as he flailed around, no doubt a detail that accessorized the performance with New Orleans flair.

Next up was Australian post-hardcore band In Hearts Wake. The New Orleans crowd had recently been exposed to the band on last summer’s run of Vans Warped Tour. Lead vocalist Jake Taylor brought the crowd to a roar when he introduced the band’s inflatable crocodile and compared having crocodiles in Australia to having alligators in Louisiana. He then surprised everybody by stepping into the crowd with the crocodile and eventually riding it back to the stage.

It seemed that most of the audience was incredibly eager to see the shredfest that would be the performance of Protest the Hero. Fans in the crowd looked to be distraught with joy, attempting to belt out the high pitched tunes along with lead singer Rody Walker. The metal outfit mesmerized the audience with their intricate crafting of rhythms and melodies on guitar and bass, airing on the side of mathcore. The band’s witty banter between songs had everybody laughing, and really brought the guys down to earth from a viewer’s perspective.
It was obvious that everybody at the show was awaiting the headliner, August Burns Red. Having come to New Orleans three times in the past year, the band has drawn quite the cult following in town and always plays to a packed house. ABR played the iconic Messengers album in its entirety, starting with “Truth of a Liar” and ending before encore with “Redemption.” The production of this show was incredible: Spinning lights, fog, strobes, and platforms set the stage for the band to give an epic performance. Lead vocalist Jake Luhrs was celebrating his birthday at this New Orleans show, so at one point the band put a sash on him. Being that the Happy Birthday sash wasn’t the most metal looking garment, it barely lasted throughout one song with Jake’s massive build hurling across the stage. After the entirety of Messengers was played, there was an exciting drum solo between Dustin Davidson and Matt Greiner all while wearing orange space suits. The encore was especially powerful, including more recent songs and ending with Jake Luhr’s stoic stance up on the platform, backlit by colorful lighting. It is no secret that August Burns Red is talented, but you haven’t begun to appreciate them until you have seen them live. You can catch the Messengers anniversary tour as it continues through mid-February!