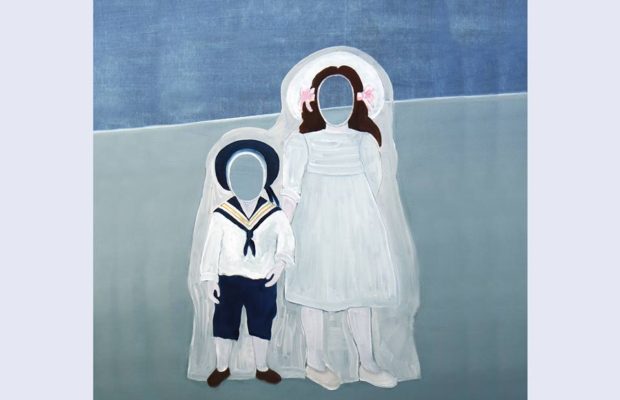 Singer-Songwriter duo Blue House has created an album that manages to be both flighty yet down-to-earth. The UK duo, composed of James Howard and Ursula Russell (formerly of Fiction and Drop Out Venus), set out to showcase both their vocal talents and songwriting capabilities while keeping the music true to their simplistic and ‘less is more’ nature.

The album’s single, “Hot Air Balloons”, captures a quintessentially 90s vibe, channeling The Cure and The Cranberries, while still sounding unique and relevant to today’s music scene. Howard’s voice sounds a little like adolescent Morrissey as well, and the entire song has a truly unmistakable English sound: simple guitars, breathy vocals, and lyrics that never quite land on the ground.

While Suppose can often sound slightly unfinished, the duo doesn’t fall short when it comes to their lyrics. On “Museum Workers”, the words “dream those dreams away…dream yourself away” softly flood the song, prompting the listener to feel a bit sleepy, but never bored. Often harmonizing and offering complementary vocals, the band (still in their fledgling hour, having formed in 2015) provides a refreshing breath of air against over-produced, under-prepared pop music.

The album may have a few flaws, but the band offers a promising start with this freshman record. The sound is perfect for a crisp, sunny day, and Howard and Russell excel at giving listeners an authentic and proper glimpse into what they have to offer. The record is unpretentious, imperfect, delightful, and soulful. As the lyrics say in “Ear to the Door”, “…but there will always be a key under the doormat”, this band have unlocked the door to their potential, and with time and further collaboration, they will certainly reach it.