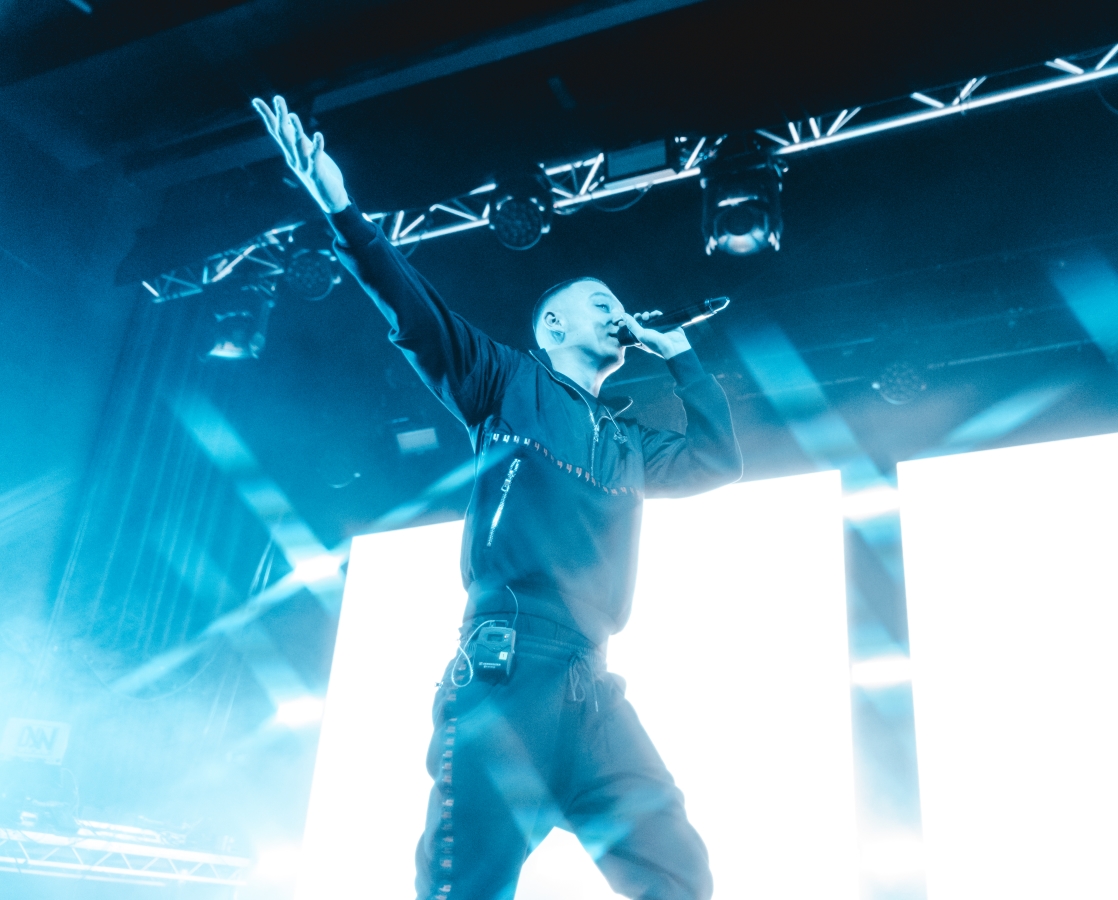 After an incredible breakthrough year Manchester’s very own Aitch returned to his hometown for a sold out show at the Manchester Academy closing out his ‘AitcH20’ UK tour. Aitch, real name Harrison Armstrong, has reached a new high in his career in 2019 after he first made a name for himself on the UK rap/grime scene in 2018 with his ‘Straight Rhymez’ track going viral and now sitting comfortably at 17 million views on YouTube and since then he has been on a roller-coaster to the top and doesn’t look to be getting off anytime soon. This year alone he has toured around the UK twice selling out shows across the country, released his debut studio album AitcH20, collaborated with megastars Ed Sheeran and Stormzy on the ‘Take me back to London’ remix and his own track ‘Taste(Make it shake)’ earned him his first Gold plaque after it peaked at number 2 on the UK charts. All this and more meant his hometown return to Manchester after arguably conquering the UK music scene would be even more of a celebration and as the youngster only turned 20 a mere 10 days before this show there was plenty to celebrate and the boy did not disappoint one bit. Support from the night came from fellow rapper ZieZie.

In typical Manchester fashion the crowd had already belted out their own rendition of Oasis’ Wonderwall played by Aitch’s personal DJ before Aitch took to the stage as the room fell to darkness, a short montage showcasing moments of Aitch’s come up from 2016-2019 and showed videos like his ‘Straight Rhymez’ track, phone recordings of him spitting freestyles in the streets of Manchester as a child and now him recently performing at Capital’s famous Jingle Bell Ball concert in London and as this all culminated he darted onto the stage and kicked off the night with the first track from his AitcH20 album. Aitch clearly had this show planned to be one of the biggest for his tour as the production of the night seemed to be amped up by 1000% with huge LED boards lighting up the sold out venue throughout the night and he even had some very special guests to surprise the Mancunian audience… Whilst performing the track ‘Kilos’, a song in which he partnered up with Manchester’s king of grime Bugzy Malone, the big man himself Bugzy made an unannounced appearance much to the delight of the crowd and joined in with the performance and it was a huge moment for Manchester and further showed how these two individuals had put Manchester on the map this year when it comes to UK grime/rap. Following on from this Aitch also brought out the likes of Jaykae,Tyreezy and ZieZie who had already performed as support for the night however this time joined Aitch in performing both of their tracks that are currently dominating the UK charts, ‘Buss down’ and ‘French Kisses’. As the night went on Aitch would go own to perform some of his fan favourites like, ‘Wait’, ‘Strike me a pose’ and his famous ‘Daily Duppy Freestyle’. It was for sure a night that highlighted the musical talents Manchester can produce and would be a show that will be looked at in years to come as a pivotal moment for UK rap/grime and for this young star. You can even re-live the show live on YouTube linked below.