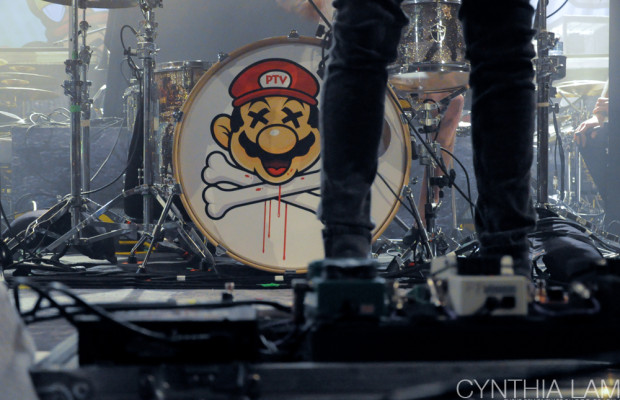 In the past few years, there have been several bands which have influenced me in one way or another. This list of bands also included the ones who I wanted to see live, ones who were a blast to see live, and ones that had music that meant a lot to me. When four of the bands on the list got rumored to be touring together this spring, it seemed too good to be true. I still remember waking up in a hotel in California, going onto my laptop and seeing the tour and the dates confirmed. It was too good to be true, and looking at the stops, I realized that the Vancouver, BC date was during my spring break, which meant I’d be able to make it out to the show from Edmonton.

I arrived to downtown Vancouver at about noon, and already there were a lot of fans lined up, eager for the show that was to be held later that night. Fast forward a couple more hours, when the line reached all the way down the street, fans were lined up with excited smiles on their face as many pedestrians stopped and asked what was going on later that night.

As soon as we got in the venue and faced the stage, the energy and anticipation of the crowd started to build up. With the mario theme song playing minutes before Pierce The Veil was set to go on, everyone was hoping for the night to start already.

Pierce The Veil put on a fantastic set, and as always it was filled with energy. They really know how to get the crowd involved and the songs that they chose to play for this tour’s set were perfect. Starting off with a cover of Black And Yellow, the crowd was quickly chanting the song and cheering as the band appeared on stage (and as for Vic Fuentes, who seemed to appear out of nowhere). They also played “Bulletproof Love” on this tour, which was a blast to hear live. They still bring the energetic and phenomenal live show that got me into them in 2009.

We Came As Romans was on next and they definitely put on a great live show. The last time I saw them was in October of 2010, and they were fantastic. I knew that they wouldn’t disappoint this time around, and I was right. The crowd was going crazy at that point and it was such a great sight to see everyone singing along the words.

Bring Me The Horizon is known for their indescribable live shows. They have so much energy and their music really gets the crowd pumped up and moving. The crowd quickly formed into a huge pit despite the seats that were in the venue. Hearing songs from the new album live was amazing, but the songs that stuck out from the rest was “Alligator Blood”. Hearing “Alligator Blood” live was an amazing experience, and there’s no words that I can think of that will describe the feeling of hearing the whole crowd chanting the lyrics.

As the curtain dropped before A Day To Remember was to go on, the crowd was a mess of anticipation. Every seat and available space was filled, and when the band finally walked on stage, the crowd quickly exploded into a big pit. They performed an amazing set, filled with songs from the new album as well as old favorites. The one song that stuck out to me from the whole night was “All Signs Point To Lauderdale”. I still remember hearing their album, listening to that song and being blown away by the lyrics and how beautiful and correct they seemed to be in regards to my thoughts. Hearing it live and singing along at the top of my lungs is one moment I will never forget.

In overall, the Gamechangers tour had the best lineup that I’ve ever heard of and is a night that I will definitely not forget. With all of the bands bringing a great live show and the crowd going wild despite the seats, it’s a tour that happens once in a blue moon. April 1st, 2011 is definitely a day I will never forget, and I think that I can say that this tour will be remembered by all who have attended.